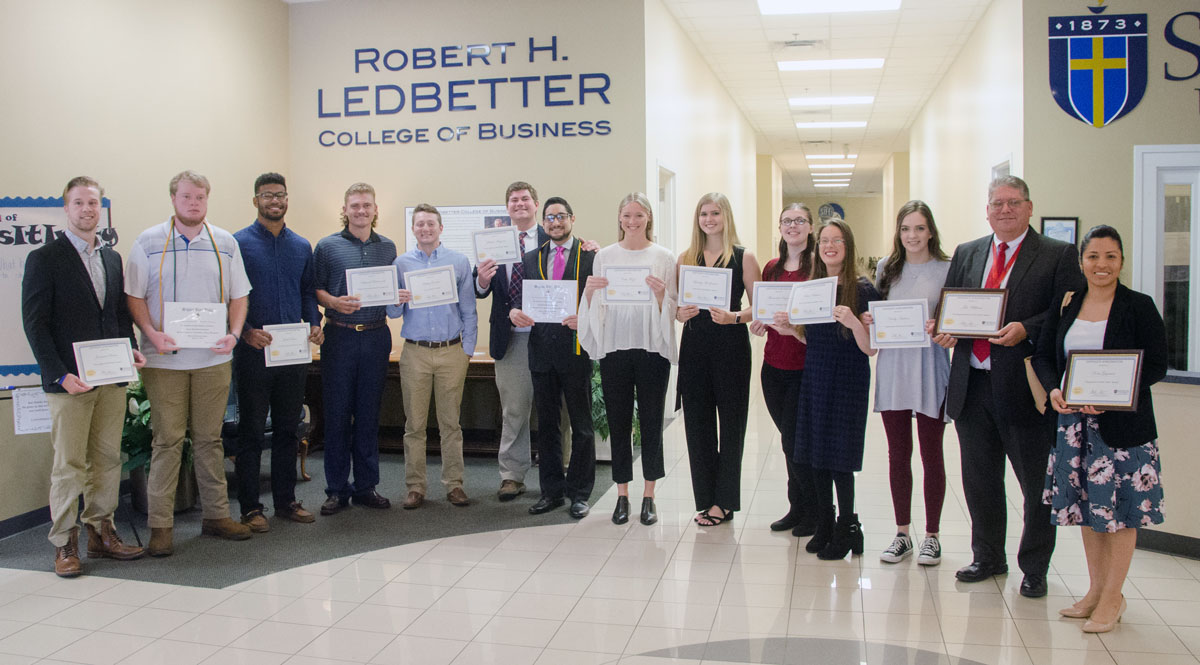 See photos from the awards ceremony

Lindsey McLendon, a business major from Roopville, Ga., received the Coca Cola Achievement Award. Established by the Coca-Cola Foundation to provide scholarships for business students, this award is given to the rising senior who, in the opinion of the faculty, demonstrates hard work and persistence in their academic pursuits.

Jeremiah Brown, a sport management major from Mount Airy, Ga., received the Leighton Richardson Award. This award is given to an outstanding senior in business or economics by Dr. Greg Richardson and his family in memory of Dr. Richardson’s father.

Celia Floyd, a business administration and management major from Dallas, Ga., received the Corinne U. Jordan Memorial Scholarship. This scholarship, established in memory of Corinne Jordan, recognizes a student who demonstrates academic excellence while pursuing a major in a field of business. Corrine completed her academic coursework in accounting at Shorter College and was employed as a certified public accountant with Ernest J. Rudert and Company in Rome. The scholarship is given to a student who exhibits determination, perseverance, and other qualities known and loved in Corrine.

Matthew Waigand, an accounting major from Canonsburg, Pa., received the Travis Williams Scholarship. This scholarship is given in memory of Travis Williams, a rising senior, business major who died in November 1998.  Travis was a free spirit who loved life and who possessed a love of learning not for the sake of knowing but in order to make a difference. The award is given in his memory to a rising senior majoring in business who exhibits the characteristics Travis lived.

Josiah Dixon, a management major from Morrow, Ga., received the Dentris Mathis Memorial Scholarship. This scholarship is presented in memory of College of Business graduate Dentris Mathis, who died in April 2011. Dentris was a member of Shorter’s inaugural football team and the baseball team. The award is presented to a first-generation college student athlete who possesses characteristics similar to Dentris, including a love of Christ and life, a charismatic personality, a strong work ethic, and a great pride in education and Shorter University.

Catherine Marie Williams, a marketing major from Atlanta, Ga., received the Heart of the School of Business Administration Award. This award is given by the College of Business faculty to the student who makes teaching and learning fun and who, in the opinion of the faculty, exhibits a love of life.

Alumna Nora Guzman received the College of Business Young Alum of the Year Award. Born in Mexico, Guzman moved to North Georgia at the age of 12. She attended high school in Rome and received both her undergraduate and Master of Business Administration degrees from Shorter University. She has worked for a Fortune 500 manufacturing company, an international software/education company, and operated her own consulting firm. She currently serves as a business consultant for the UGA Small Business Development Center. When not at work, she continues to pursue her passion for helping others. In 2010, she founded a non-profit entity, Casa Michoacán, with the mission of enhancing the wellbeing of the community through enhancements in infrastructure and education programs. She was nominated for Rome Life Magazine’s 20 Under 40 listing in 2016.

Alumnus Tim Williams received the College of Business Distinguished Alum of the Year Award. A 1984 graduate of West Rome High School, Tim attended Georgia Tech, the University of West Georgia, and Shorter College before entering the work force. He worked in the textile and construction industries for more than 20 years. Twenty-four years after graduating high school and at the urging of his wife, Williams returned to Shorter University to finish his degree. He graduated from Shorter in 2009 with a Business Administration degree and a minor in accounting. In 2011, he became Director of Maintenance and Transportation for Rome City Schools, and in 2016, he was promoted to the school system’s Chief Operations Officer. He and his wife, Melissa (a Real Estate Agent with Hardy Realty), have three children: Caleb and his wife, Morgan; Brennan and her fiancé, Taylor Cline; and Maya, a senior at Rome High School. They have a three-year-old granddaughter, Harper Grace.