Careers in History and Political Science

For most students Historians and Political Scientists are the teachers they meet in the classroom. But teaching is only a small part of what people do in these professions.

Historians work in a wide variety of fields beyond teaching.

Many historians work for the government particularly at the state and federal levels. For the federal government they work in virtually every branch and department. Some work recording the activities of their department, researching and writing institutional histories while others analyze information to help set policies and guide decision making. Many maintain and interpret historical sites for the Park Service and the Military. Historians work for the National Archives, the Library of Congress and in virtually every branch and department of the federal government. At the State level historians work in many of the same ways as their counterparts in the federal government and in preserving their state’s heritage by researching sites prior to construction projects.

Many historians find careers in business where their skills of research, analysis and interpretation are extremely beneficial to their companies. Many major corporations hire institutional historians to maintain corporate histories and museums of their past accomplishments. Still other historians become engaged in corporate management using their unique perspectives to guide their companies and help them avoid repeating errors of the past.

Quite a few historians form businesses of their own consulting for businesses, government agencies and private individuals who wish to have a historian research a business, a location or a family. One type of private consulting historian is the genealogist who researches a family tracing its lineage back through many generations.

Museums and archives also hire many historians to help analyze, organize and interpret their collections for researchers and the general public. This includes work behind the scenes in research rooms, labs and workshops preserving, preparing and displaying exhibits of artifacts, documents, and other media as well as speaking to groups, giving tours and presentations. Historians also become actors performing in “living history” exhibits at re-enactment sites such as Colonial Williamsburg.

Many historians find careers working as Librarians aiding students and researchers in their search to locate information and materials which they will in turn use for their projects.

The publishing industry also hires significant numbers of historians. Their research skills are used to check facts in books, articles and films prior to their publication. Historians experience and ability as writers is also useful in editing the work of others. Some historians even find work in Hollywood doing similar work for theatrical movies and television programs.

With the apparently ever growing interest in historic preservation and restoration many historians are finding lucrative careers in this field of public history. While public history encompasses much more than historic preservation this is one of the most rapidly growing and developing career fields for historians. Preservation and restoration specialists work to research artifacts from photographs and documents to major buildings and consult with technicians, architects and craftsmen to bring these artifacts back to their original condition.

What can you do with a major in political science?

Do you want to use a political science degree to teach at an institution of higher education?

Political science is a common major for students who intend to complete a law degree. It should be noted that political science courses in college tend to be theoretical in their orientation—in contrast to the application of law that lawyers focus upon. Political science or any field of study that emphasizes reading/comprehension/logic skills are good backgrounds for law school. Check out this website for information on law schools and the LSAT (the standardized test required for admission to all law schools that are members of the Law School Admission Council):

Do you want to work in the public sector?

The following websites list government jobs in a variety of fields—at the local, state, and federal levels:

Are you interested in a career with a specific federal agency?

Try these federal websites for information:

http://www.fbi.gov/ (The Federal Bureau of Investigation)

http://www.state.gov/ (The U.S. Department of State)

Would you like to use your political science degree to work for a research institution?

Look at these two websites—Heritage is a conservative think tank and Brookings a liberal think tank:

Thanks to Lucinda Baker for the above information. 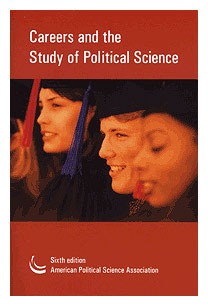