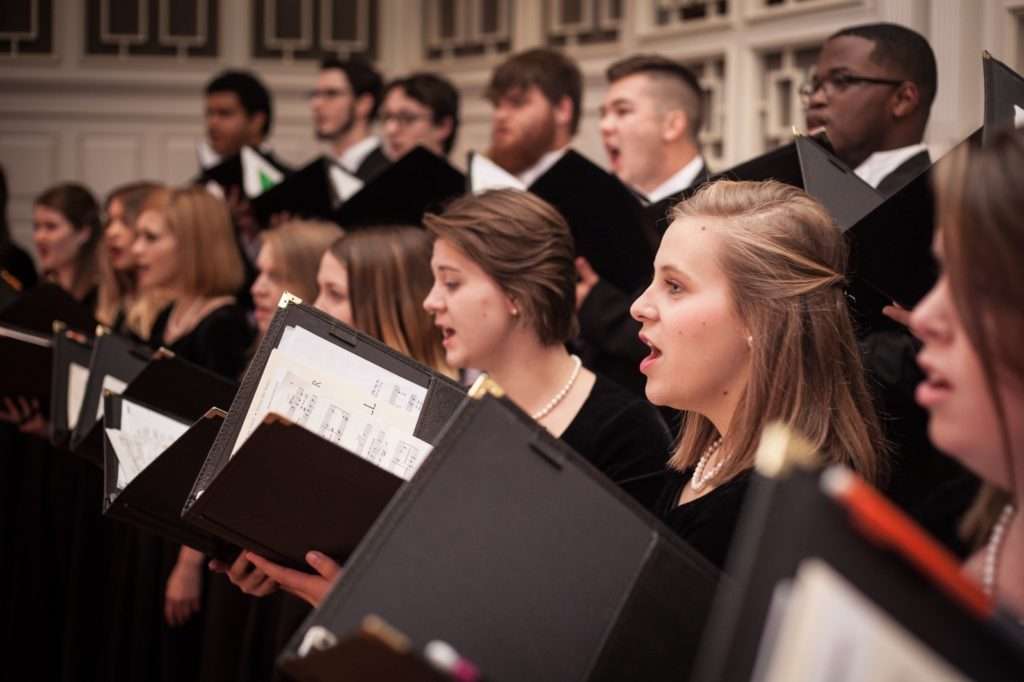 The Choral program at Shorter University exists to transform lives through Christ by equipping students for choral excellence and fostering a choral community in the classroom and church. The Shorter choral program includes The Shorter University Chorus, which is the worship choir of Shorter University, as well as the historic Shorter Chorale, the premier choral ensemble on the Hill. Both choirs perform in churches and schools around the Southeast. The entire choral program combines in December to present “Feaste of Carols” and in April to present a major choral masterwork.
If you are interested in having one of the choirs perform at your church or school, please contact Dr. Bryan McDonald at bmcdonald@shorter.edu.

The Shorter Chorale, founded in 1968, maintains a history of excellence in choral singing. The Chorale performs concerts annually in the Rome area. Additionally, the Chorale tours annually throughout the United States and internationally every three years. The 2004-2005 season featured a tour of the great cathedrals and churches of England with performances in Coventry Cathedral, Canterbury Cathedral, Christ Church, Oxford and Great St. Mary’s in Cambridge. In 2005, the first broadcast of the Shorter Chorale was heard on National Public Radio.

Previously, the Chorale has toured extensively throughout Europe and Russia, earning resounding critical acclaim. The Chorale has been featured at the Georgia convention of the American Choral Directors Association, Georgia Music Educators In-Service Conferences, as well as the Georgia National Association of Teachers of Singing convention. Additionally, the Chorale performed at the 2012 American Choral Directors Association Southern Division Convention.

Repertoire is based on a variety of choral music, including classical works of all eras, world music, spirituals, gospel pieces and jazz standards.  Recent major works performed include Mozart’s Vesperae solennes de confessore. K.339, the Poulenc Gloria, and the Mozart Requiem.

The Shorter University Chorus is a non-auditioned ensemble open to anyone from the university that specializes in music for worship. The SU Chorus’ repertoire includes modern hymns, contemporary Christian music, traditional hymnody, and standards of church music from various musical periods.