Guest Recital 'Around the World with 30 Fingers' Set for Jan. 31 - Shorter University 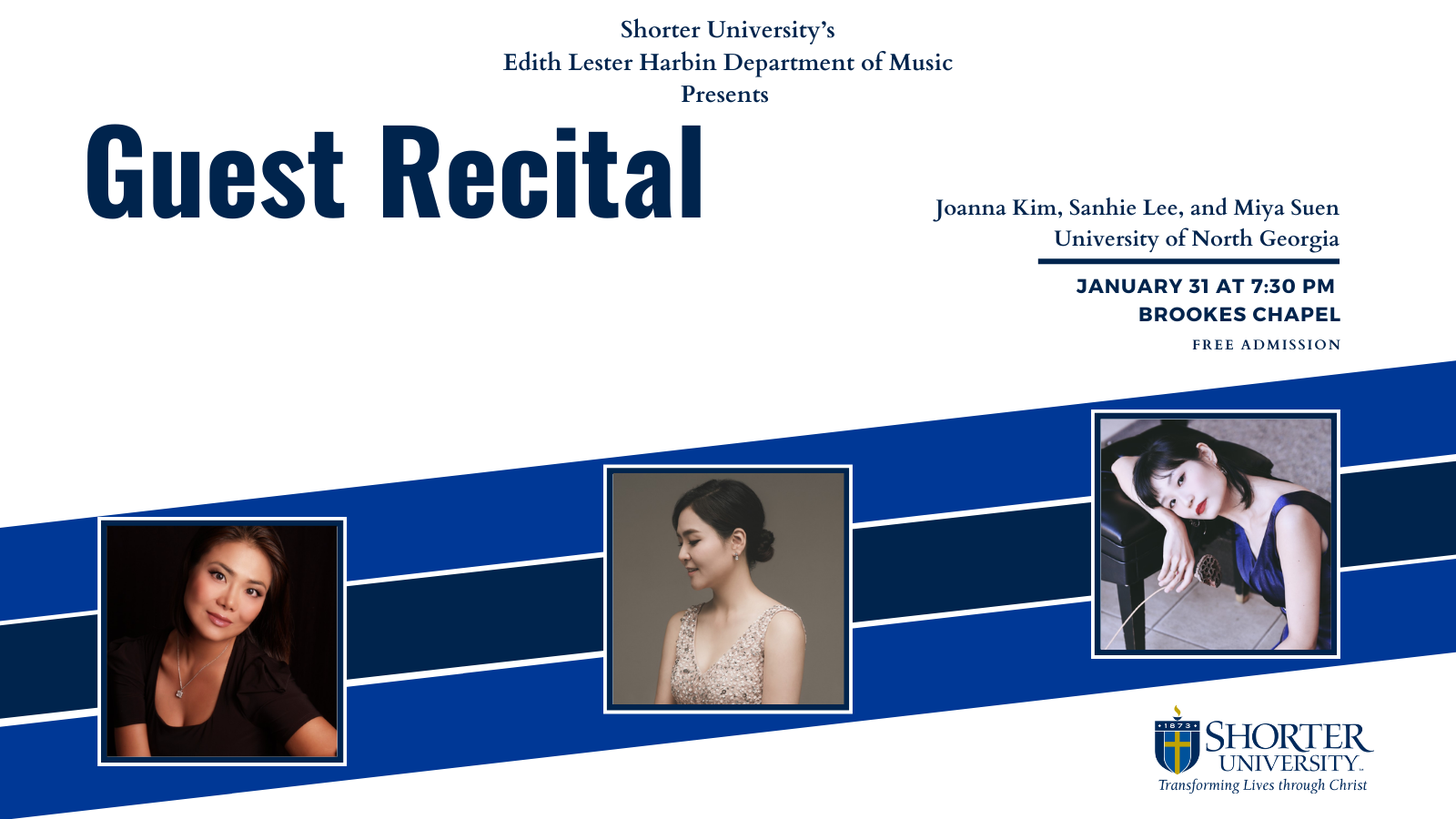 Shorter University’s Edith Lester Harbin Department of Music will host a guest recital titled Around the World with 30 Fingers on Monday, Jan. 31. The performance will be held at 7:30 p.m. in Brookes Chapel on Shorter’s Rome campus. The event is open to the public at no charge.

The performance will include music from different countries including Armenia, Russia, Korea, and many more. The recital is being performed by pianists Joanna Kim, Sanghie Lee, and Miya Suen.

Joanna Kim has an active career as a concertizing artist as a soloist and chamber musician. She has performed in multiple countries including Germany, Russia, Korea, China, Cambodia, Thailand, France, Italy, Australia, the United States and Austria. Joanna began her piano career at age four. She studied music at St. Scholarstica’s College, West Virginia University, and the University of Georgia. Joanna received her master’s and doctoral degree from the University of Georgia, majoring in Piano Performance, and minoring in Vocal Performance & Collaborative Musical Art. Along with her outstanding education background, Joanna has won multiple teaching awards and grants. She currently serves at the University of North Georgia as the Associate Chair of Music Department. Her students have also shown outstanding performance by winning multiple awards and making appearances in Carnegie Hall, Spivey Hall, and John F. Kennedy Center for Performing Arts.

Sanghie Lee is an accomplished pianist and active chamber musician, who has won many awards for her talents. She has performed at music festivals both in the United States and Korea. Sanghie began her piano career at the age of five in South Korea, and studied at Yewon School & Seoil Arts High School in South Korea and at Yonsei University. Sanghie moved to the United States to further her studies at the Jacobs School of Music of Indiana University where she earned her first Performer Diploma. After that, she went on to the College-Conservatory of Music of University of Cincinnati and earned her DMA and Artist Diploma. She currently serves as a piano faculty and collaborative pianist at the University of North Georgia.

Miya Suen is an excellent performer and awarded pianist. She began her music career in Hong Kong at age ten and was accepted to study at the Music School of Tianjin at twelve. She went on to study at the Rimsky-Korsakov Conservatory in Saint Petersburg, Russia, where she completed her master’s degree in 2012. She then went on to earn her Artist Diploma from the Schwob School of Music at Columbus State University in 2016. Miya is currently working as a collaborative pianist at University of North Georgia.