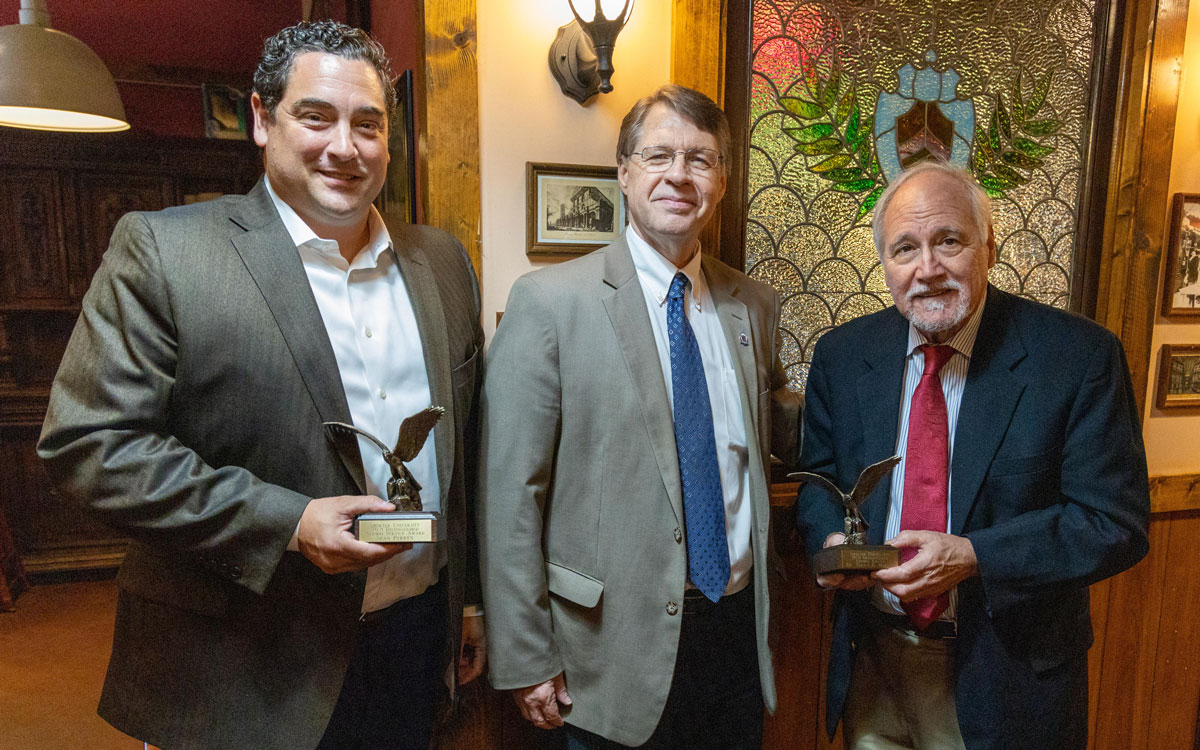 “We often hear from employers who say they love to hire Shorter graduates because of the values they bring with them to the job, and we are proud our alumni are known for the excellent way they serve through their communities, churches, professions, and families,” said Shorter University President Dr. Don Dowless. “This year’s Distinguished Alumni honorees exhibit the stellar qualities Shorter graduates are known for and are helping move the University forward toward its upcoming 150th anniversary and beyond. We are delighted to honor them.”

He added, “These graduates have shown continued investment in the University and our students through their support of our SUForward Campaign and the Christmas on the Hill President’s Gala. We invite alumni and our community to be part of this year’s Gala, which benefits student scholarships and assists in moving the students forward on their path to success.”

Shorter’s Christmas on the Hill President’s Gala will be held Thursday, December 2, in the Winthrop-King Centre. The featured speaker with be Floyd Primary Care Pediatrician Dr. Sylvia Washington. Sponsorship packages are available at www.shorter.edu/gala.

Dr. Terry Morris, a 1964 graduate who is now in his 56th year on Shorter’s faculty, received the Distinguished Alumni Award. This award is presented in recognition of outstanding personal achievement, public service, or accomplishment.

Dr. Morris graduated from Shorter in 1964 with an A.B. in History. He earned an M.A. in History from Emory University in 1965 and a Ph.D. from the University of Georgia in 1976. Now a tenured Professor of History and Political Science, Dr. Morris has served as a member of Shorter’s faculty since 1965 with four years on leave to pursue the Ph.D.

He earned the Ty Cobb Education Scholarship in 1963 and received the Vulcan Materials Company Teaching Excellence Award in 1993. Dr. Morris has impacted generations of Shorter students through the classroom and through the University’s Honors Program, which he pioneered. He is the author of The World Transformed: Modern Civilization Since 1648 (with Dr. Charles Carter) and Organizing the Firm: The Role of Science in Modern Management.

He has been married for 53 years to his wife, Janet White Morris, a 1970 graduate of Shorter. She was an extraordinary teacher and retired from North Heights Elementary School, where she spent most of her career.

Dr. and Mrs. Morris are longtime supporters of Shorter. They give generously to support students through the Shorter Fund and are regulars at on-campus events including the annual Christmas on the Hill President’s Gala.

Mr. Perren graduated with a B.S. in Biology and a minor in Chemistry. During his time at Shorter, he played for the Shorter Hawks baseball team and was a two-time Academic All-American. During his senior year, the Hawks won the conference championship.

After graduating, Sean returned to his hometown of Tuscaloosa and worked for EquiPartners Financial helping with financial planning and mortgages. He then worked as branch manager for five years at the National Bank of Commerce, where he was a top producer in loan volume and accounts, leading the company in credit life and disability sales.

In August 2003, he opened a State Farm Agency in Marietta. During his 17-year career, Sean has consistently been a top agent in the company of over 19,000 agents, including President’s Club, which is the top 50 in the company.

Sean is married to Shannon, who is also a State Farm Agent. They have six children and two dogs. Sean likes playing the guitar (including worship bands at his church), playing baseball in the MSBL in Atlanta, and coaching his children’s baseball teams.

Dr. Jeffrey Rice, a 2012 graduate and a pediatrician in Oklahoma, received the Distinguished Young Alumni Award. This award honors a graduate from the past 10 years who has shown promise though professional achievement, community service, or dedication to the University.

Dr. Rice graduated with a B.S. in Biology and a minor in Chemistry. While at Shorter, he was involved in Delta Sigma Phi, Shorter Orientation Staff, and Residence Life. He also enjoyed trips to Ossabaw Island with the science faculty and classmates where they bonded in God’s creation.

Jeffrey completed his residency at OSU Pediatrics in Tulsa, Oklahoma, earlier this year and is now working as a pediatrician at Warren Clinic Pediatrics Springer. Dr. Rice believes Shorter University gave him a strong faith-based foundation which he was able to build on with his medical knowledge and training. He said his Shorter experience helps him keep a faith-based approach to medicine with all his patients and impact them positively. He is the son of Bryan and Donna Rice of Shannon and is married to Ashley Rice.