Austin Kibble, a sophomore Worship and Music Leadership major at Shorter University, will be traveling around the globe this summer to share the Gospel. He will be serving with SendMeNow, an organization sponsored by Baptist Collegiate Missions (BCM) of the Georgia Baptist Mission Board, which gives college students the opportunity to serve God through missions in the United States and abroad.

Students are able to participate in SendMeNow missions through fundraising on campus and in the community. BCM chapters from around the state of Georgia also combine their money to send out students each summer so that students do not have to raise all of the funds on their own. Through SendMeNow, students are equipped to share the love of Christ and are encouraged to grow spiritually. 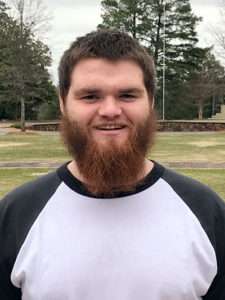 After applying and participating in an interview process, Kibble was selected to go to Uganda. From June 27 to July 8, he will be helping out with Bible-based day camps for all ages in Jinja, Uganda and sharing the word of Jesus. As the team worship leader, Kibble will have the opportunity to minister to people through music.

As far as expectations go, Kibble says that when it comes to missions, it is better not to have any. “What I’ve learned from the past four mission trips is that anything that I expect will be way too boxed in for what God will teach.”

Kibble is currently the athletic coordinator and the in-reach coordinator for BCM at Shorter. He is a member of Burning Bush Baptist Church in Ringgold, and while at Shorter, attends Three Rivers Church in Rome.

Rev. David Roland, Shorter’s campus minister, said he loves to witness students’ transformations after they have completed mission trips. He has seen several students deepen their relationships with Christ as a result of participating in missions.

“A student last summer was able to lead a young teenager to Christ after building a relationship with this teen during the summer,” Roland said. “This Shorter student had never done anything like this. Her missions experience was very relational.”

Roland believes it is important for all students to have mission experience before they graduate. He said many times students will not take the next step in serving.

“They might say, ‘I can do that next year.’ Before long, it is their senior year and they are looking for a job after graduation,” Roland said.

“It is a wonderful experience,” Roland said. “This summer I will be leading one of the SendMeNow mission teams to Brazil. It is a medical mission trip to the Amazon region of Brazil.”

Roland added that there are opportunities for students to participate in mission trips with BCM during the school year.