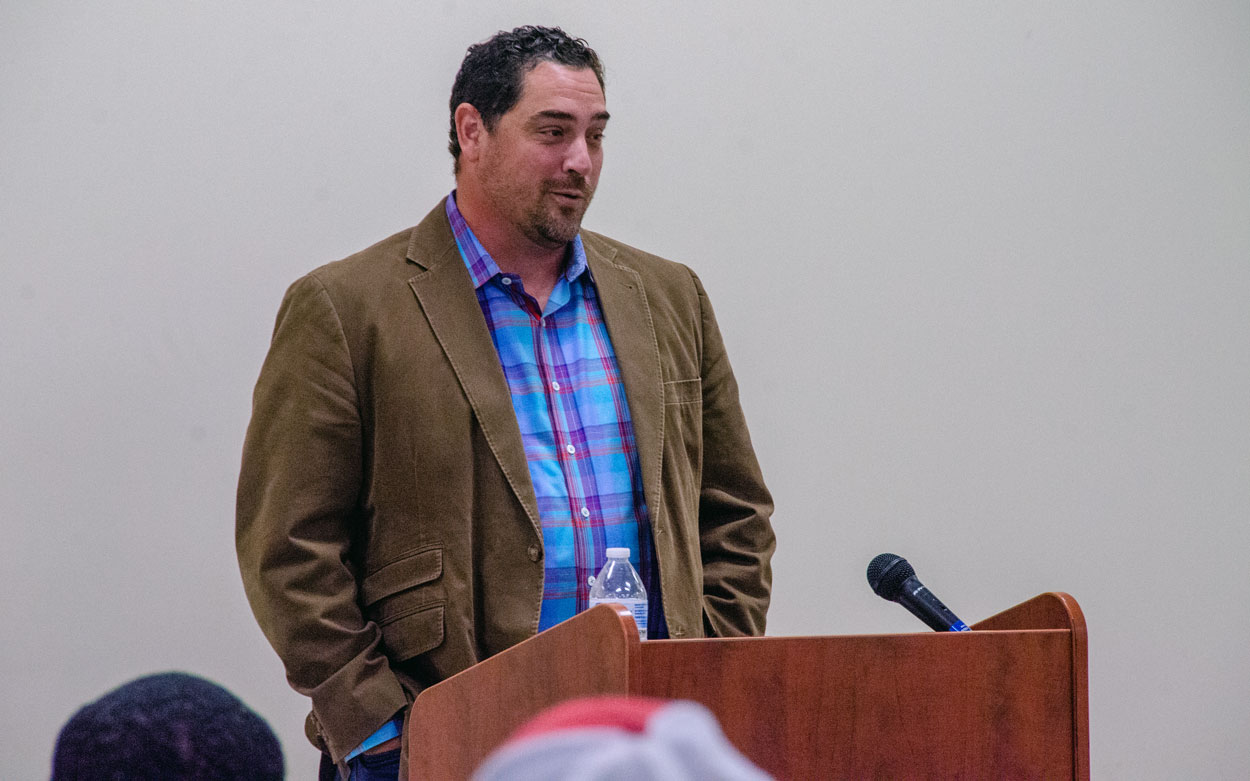 Rome, Ga. — During his 17-year career as a State Farm Agent, Shorter University alumnus Sean Perren has built a reputation for excellence. He has consistently been a top agent in the company of over 19,000 agents and regularly attains President’s Club level status, a ranking that recognizes the top 50 in the company.

An avid supporter of Shorter University and its SUForward Campaign, Perren regularly sponsors the Christmas on the Hill President’s Gala and generously supports Shorter Athletics through gifts to Shorter Baseball and the Turf Renovation Project for Ben Brady Field. The University’s on-campus baseball hitting facility bears his name.

Dr. Heath Hooper, Dean of the Ledbetter College of Business, said, “The College of Business embraces the SUForward spirit and its focus on a bright future. We are excited to have successful alums like Sean return to campus and talk with our students through the lecture series. Sean is a great role model for many of our young business students who are looking forward to the next phase of their careers.”

“God directed my path, and it turned out to be very different from the one I envisioned as a student,” Perren told the students gathered at the College of Business.

After earning an Associate’s degree and playing baseball at East Mississippi Community College, he played for the Shorter Hawks Baseball team and was a two-time Academic All-American. His pitching helped the Hawks claim the conference championship during his senior year in 1998.

“What I learned best from college was how to learn,” he said. “Don’t take for granted your studies here. In the mortgage field, I used that ability to learn about our competition and what our advantage was, and I sold it. I found a passion for sales. It was like the same feeling you get when you strike out someone. I made a sale? That’s great; I won this one!”

He worked for EquiPartners Financial, helping with financial planning and mortgages. At 23, he was hired as branch manager at the National Bank of Commerce in Tuscaloosa, where he worked for five years and was a top producer in loan volume and accounts and led the company in Credit Life and Disability sales.

“At that point, State Farm came calling. They liked how I was taking care of people,” he said.

In August 2003, he opened a State Farm Agency in Marietta.

He is married to Shannon, who is also a State Farm agent. They have six children and two dogs.

“I feel like some of the success I have is because of my wife. We are partners and encourage one another. I have to be selfless and put her first. In business, I have to work at being selfless, but I’ve learned, if we are putting people first, it comes back around.”

Perren encouraged the students to pursue their future career path with a blend of determination and a willingness to do the work.

“When people say you can’t, that just means you go harder! They told me I couldn’t play any more ball as a pitcher because I had elbow surgery. I could have stopped, but that year I went 8-1 and threw a no-hitter, and we won the state championship.

“People may tell you ‘you can’t go to that major; you’re not smart enough.’ I got a degree in pre-med/biology because I knew I could study. I got busy and did it. You’ve got to put in the work. I had a tough semester when I first got to Shorter. I was homesick—girlfriend-sick, really—and my classes were hard. I could have gone back home or have chosen to go on. I chose to go on, and I ended up having a great experience here. The professors here know you one-on-one. Do you know what a big deal that is? Don’t take it for granted; take advantage of the opportunity.”

In addition to his career success, Perren takes advantage of opportunities to play guitar, including in worship bands at his church. He plays baseball in the MSBL in Atlanta and coaches his children’s baseball teams. He told the students to find the passion that drives them and then move forward.

“How did I find passion for insurance? I can help people, and I like that. If I work harder, I make more; that’s fun to me. I encourage you to go for it; have a plan ready. Always have a goal and a vision. It might turn out to be in insurance versus being a doctor, but put God first in everything and go for it. You do things the right way, and God will open the doors.”