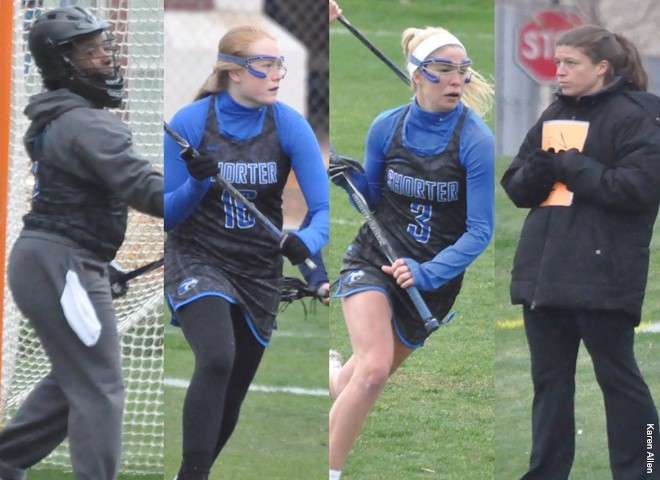 With the conference invitational set to begin Friday the Gulf South Conference announced its annual list of All-Conference honorees with four earning recognition from the Lady Hawks.

Her marks in caused turnovers and groundballs, individually rank among the top of Division II at second and third, respectively.

En route to the Coach of the Year honor, Dulaney saw her team go from 3-10 (1-2 GSC) a season ago to finishing the regular season this year at 10-5 (4-4 GSC). On the year, the Lady Hawks have outscored opponents 237-131, with opponents averaging just 8.38 goals per game, while Shorter scored an average of 15.8 goals per outing.

Joining Pridemore as All-Conference honorees were second time selections, Alex Abbey and Catherine Mitchner, as each earned an All-GSC selection last season with Abbey being named Defensive Player of the Year for 2016.

Mitchner led the Lady Hawks in the goal, tallying 132 total saves; good for a .516 save percentage. Marks that rank eighth and seventh in DII, respectively.

Abbey finished second on the team in caused turnovers, tallying 26 for the year, with 29 ground balls and 24 draw controls to go along with two goals and two assists.

For the year, the team has seen a balanced effort on offense with three players tallying 40+ goals; led by Crystal Marshall’s 45. Both, Shelby Beverly and Morgan LeBlanc have recorded 40. Beverly leads the effort in assists with 24, while Marshall has 23 and LeBlanc has added 21. Morgan Perrone is just shy of thirty goals for the year with 28, while also adding 18 assists. Each earned Player of the Week honors at least two times apiece, as well.

The Lady Hawks open play at the GSC Tournament Friday, April 21, against Alabama Huntsville at 2:00pm on the campus of Young Harris College. The winner of the game will take on the winner of YHC/Montevallo on Sunday, April 23, at 1:00pm.