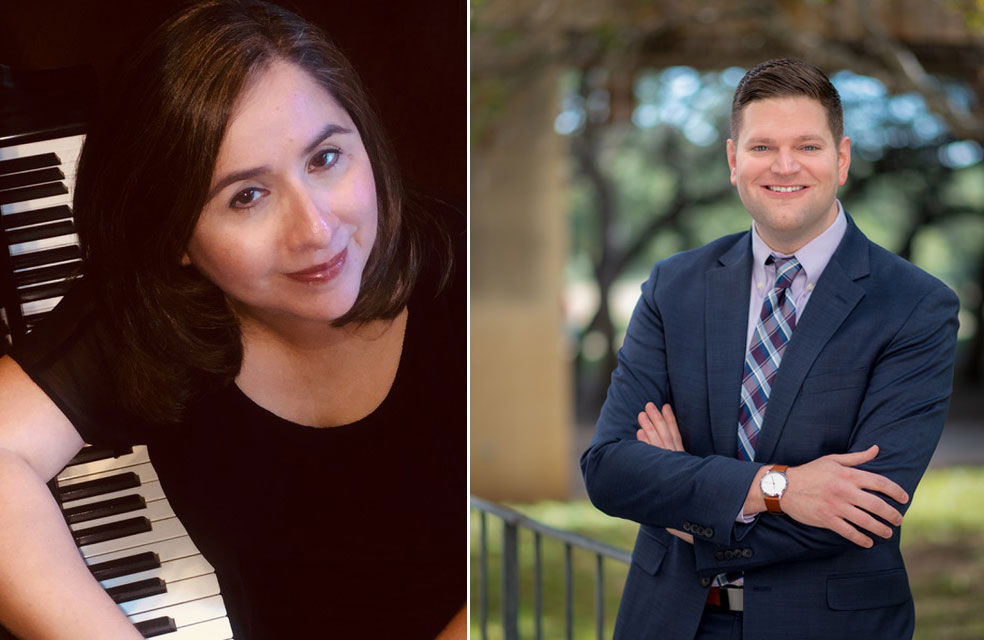 Rome, Ga. – Pianists Kasandra Keeling and Ivan Hurd will present a guest recital at Shorter University on Monday, Sept. 23. The event will begin at 7:30 p.m. in Brookes Chapel and is open to the public at no charge.

The duo will be presenting a four-hand recital, which will feature both pianists playing the same instrument. The recital will feature Sonata for Piano, Four Hands by Frances Poulenc, Petite Suite for Four Hands by Claude Debussy; Hungarian Dances for piano, four hands by Johannes Brahms, and Gazebo Dances for piano, four hands by John Corigliano.

Keeling, professor of music and coordinator of keyboard studies at the University of Texas at San Antonio (UTSA), is an active soloist, chamber musician, orchestra soloist, and master class clinician. She has performed across the United States, Mexico, at the Royal Conservatory in Canada, and in China at the Central Conservatory of Music in Beijing and at the Conservatory of Music at Nanjing Norman University. She has given numerous performances or performance-related presentations at state and national conferences.

In 2014, she was awarded first prize in the professional concerto division of The American Prize for her performance of Rachmaninoff’s Rhapsody on a Theme by Paganini, and in 2015, she was honored with the President’s Distinguished Achievement Award for Performance at UTSA. She received the Bachelor of Music and Master of Music degrees in piano performance from the University of Houston and was awarded the Doctor of Musical Arts degree in piano performance from the University of Colorado at Boulder.

In 2013, Hurd attended the Classical Music Festival in Eisenstadt, Austria, where he performed in the famed Haydnsaal at the Esterházy Palace. He has performed in master classes for pianists such as Alan Chow, Theresa Bogard, and Read Gainsford. Hurd was one of 10 pianists in the state of Michigan selected to compete for the Rosamond P. Haeberle Memorial Piano Award.

Hurd has presented at workshops at national conferences such as the Music Teachers National Association, GP3 (the Group Piano and Piano Pedagogy Conference), and the National Conference on Keyboard Pedagogy. He holds piano performance degrees from Eastern Michigan University (M.M.) and the University of Iowa (B.M.), and a Doctor of Musical Arts degree in Piano Performance and Pedagogy from the University of Oklahoma.

While in Rome, Drs. Hurd and Kelling will also present a workshop for the Rome Music Teachers Association. Founded in 1873, Shorter University is a Christ-centered, four-year liberal arts university committed to excellence in education.  The Princeton Review annually includes Shorter on its list of best Southeastern Colleges. The university offers traditional bachelor’s degrees in 40 areas of study, online courses and degree programs, undergraduate programs for working adults, associate’s, and master’s programs.

Alumnus Cliff Duren to be Featured Speaker at President's Gala

Guest Artists to Perform at Shorter on Thursday