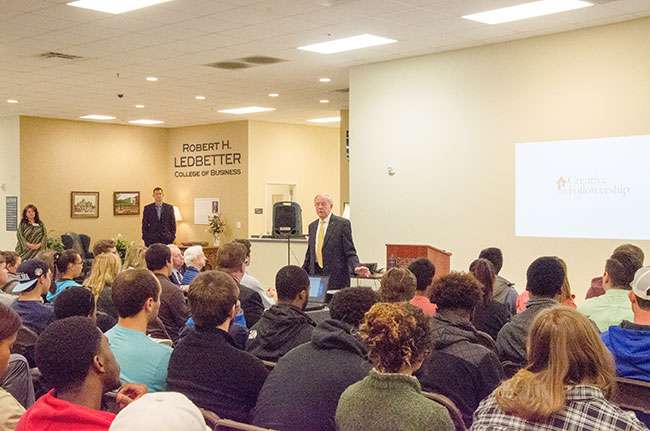 Speaker Jimmy Collins told Shorter University students and community guests that he was going to share with them “the best career advice ever.”

The former President and Chief Operating Officer of Chick-fil-A and Author of “Creative Followership: In the Shadow of Greatness” quoted Proverbs 27:18, which reads, “He who tends the fig tree will eat its fruit, and he who cares for his master will be honored.”

See a gallery of photos from the event.

“I learned that lesson when I was 10 years old and the hunky man came to my school on a three-wheel bicycle,” Collins said.

Like his schoolmates, Collins said, he loved the hunkys – a treat that featured a vanilla ice cream sandwich on a stick and dipped in chocolate, which the man sold for five cents.

“One day when the hunky man came, he said the principal had told him ‘If y’all keep leaving trash out, I can’t come anymore.’ I said to myself, ‘Jimmy, you can do something about this,’ and I began to pick up the wrappers and sticks and put them in the trash can on the hunky man’s cart. When everyone was gone except me and the hunky man, he told me to have a hunky bar for free. So, I learned, ‘He who tends the hunky man’s cart will eat hunkys’ so every afternoon I was out there picking up trash.”

Soon his classmates caught on and began also picking up trash, hoping for a reward, Collins added. “But the hunky man said, ‘No, Jimmy is the one.’ I had cornered the market. I learned that principle when I was 10 and I’ve practiced it thereafter. The creative follower is not a slave or a servant but an active participant.”

Collins told the students that they should become active participants in their future career arenas while still in school. “If you’re smart, you’ll get part-time jobs and internships before you graduate. A study by the Pew organization found that 50% of responders to a survey said what they regretted most was when they graduated they had no real-world experience. Get experience, and along the way you’ll meet some good bosses.”

Collins then shared the story of working as a 12-year-old delivering groceries on a bicycle. “Mr. Brown hired me to do what he didn’t like to do,” he said. “That’s an important principle – do what the boss does not like to do. I became the third corporate employee that Truett Cathy hired to expand Chick-fil-A. When people would ask me what I did, I always said, ‘I do whatever Truett does not like to do.’ Truett would say, ‘I don’t like to do very much.’ We played that scene out for many years.

Collins shared other principles of creative followership including “Any job worth doing is worth doing right,’ “If you ever expect to amount to anything, you’ve got to do your best work always,” “You will have to do more than what’s expected,” and “Make your decisions good.”

He recounted the story of ordering Luzianne tea when he was left, as a 16-year-old, in charge of the store at which he worked. “When he got back, Mr. Hancock gave me a lecture… He said, ‘That tea is your problem.’ That was the best thing he could have told me. When it was delivered, I bought the first box… I became the Luzianne tea super salesman. Pretty soon that Luzianne tea was flying off the shelf. That was not a good decision that I made to order the tea, but I was determined to make my decision good.”

Collins also told students about his days fighting the career war. “I was going to get the best assignment and the titles and the corner office. One day, I realized that was no way to live. I decided from now on, I will take on the difficult and dirty tasks no one else wanted. Soon, we were cooperating. We went from a spirit of competition to one of cooperation. You won’t show yourself as an outstanding performer doing the easy jobs.

“Don’t let yourself live in a way that you look back and say ‘I wish I had known,’” he added.

Recounting the fact that he worked for Truett Cathy for more than 30 years, Collins said, “My book is subtitled ‘In the Shadow of Greatness,’ and Truett Cathy was a great leader. I also have another followership I practice. I also follow the Leader of Leaders, the Boss of Bosses, and the King of Kings and because of that I will one day be able to stand in the real shadow of greatness.

“How do you want your life story to end? You’ve got to make the decision on who you will be and what you will do. Make the right choices.”

Dr. Heath Hooper, Dean of the Ledbetter College of Business, said, “Jimmy Collins hit a home run in today’s Hopkins Lectureship series. Mr. Collins had all of the Shorter University students’ attention from the very first word. His rapport with his audience shows the type of person Mr. Collins is. He had them captivated. We are so very grateful to all have learned a little bit more than we started the day with. His advice for the students to tell their own story, take advantage of opportunities and become a creative follower ties perfectly into the mission of Shorter University.”

Collins lecture was sponsored by Shorter’s Hopkins Institute for Business Ethics, which hosts lectures or seminars featuring notable individuals in government, education, industry, medicine or other fields who are known as ethical leaders. The Hopkins Institute was funded through the generous support of Col. and Mrs. Harvard Hopkins.

Author Reminds Shorter Students to ‘Look Up, Don’t Give Up’