Author Reminds Shorter Students to ‘Look Up, Don’t Give Up’ – Shorter University 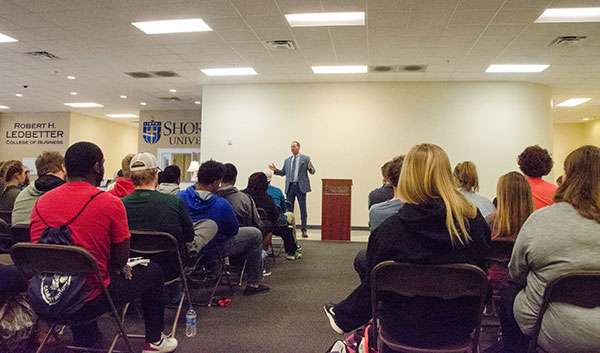 Jon Decker, author of the newly released book “Golf is My Life,” told students in Shorter University’s Robert H. Ledbetter College of Business that he is thankful he never won a major golfing title.

“I’m so thankful that I did not win the Masters or become a PGA tour champion because I would not have glorified God,” Decker said. “I would not have been able to do that. I’ve learned to ask an important question ‘how is my life glorifying God?’”

Decker, who most recently served as director of instruction at the New Albany Country Club, spoke at Shorter’s business school as part of Shorter University’s Character Education course taught by Rick Johnson and the second of a series of lectures to allow attendees to hear personal success stories and receive advice from business professionals.

See a gallery of photos from the event

“None of those who came into lobby of the College of Business today expected to hear such a message of humility and redemption as they heard,” Johnson said of Decker’s lecture. Decker was a high school basketball teammate of Johnson’s son, NFL Super Bowl-winning quarterback Brad Johnson. “God spoke today through the words from Jon. One of his sentences was ‘Don’t chase happiness… Chase joy… for happiness is temporary… Joy is forever because it is the Holy Spirit in your heart.’ God is all about unexpected blessings. It was not by accident that we were here this morning. God meant for all of us to hear Jon’s message as he held his golf book that is not about golf at all.”

Dr. Heath Hooper, Dean of Shorter’s Ledbetter College of Business, agreed. ““We were very pleased to have Jon Decker as part of our lecture series. Jon was able to share his passion for God and followership in Christ which he tries to live by every day. His advice for the students for their personal journey through life was a true testament to the type of person he is and what it means to be a student of Shorter University. We wish Jon the best in his future endeavors of authorship and motivational speaking.”

Decker began his teaching career at the Grand Cyprus Academy of Golf, where he worked for 20 years under Top 100 Teachers Fred Griffin and Phil Rodgers. In 2015, Decker was named the Southern Ohio Teacher of the Year. From 2003 to 2011, he was recognized as one of the best teachers in the state of Florida by Golf Digest. He has taught players of all levels, including players on the PGA Tour, LPGA Tour, Champions Tour, and various other mini tours. He also coached at the PGA Championship 2011-2014 and the women’s U.S. Open in 2007. He has written for Golf Digest and been featured in Golf Magazine and on the Golf Channel. He is currently on tour promoting his new book, “Golf Is My Life: Glorifying God Through the Game.” His decision to write this book came from his understanding as an adult of the power and force the Holy Spirit has in his life.

During his lecture at Shorter, Decker suggested that students remember an important principle when dealing with life. “My desire – and I encourage you to do this – is to turn my life over so that everything I do is for the glory of Jesus Christ. I sum that up as ‘Look Up, Don’t Give Up.”

He also encouraged students to maintain a positive attitude as exemplified by golfing great Seve Ballesteros. “You can’t beat yourself up in golf, and you can’t beat yourself up through life. I told you I hit rock bottom before writing this book. In my 40s, I lost my marriage, I lost my condo, I lost my house, and, two days after this book came out, I lost my job. But I tell you, I have never lived more than I am right now. I say ‘Thank you, God, for letting me lose my job because your grace is sufficient.’ Wherever you go in life, don’t give up. Don’t worry about happiness. Focus on joy because you get joy through Jesus Christ. There may be times that aren’t happy, but we can always have His joy.”

Decker offered the students advice for success in life, including the importance of guarding their online profiles through social media, remembering to always act as if they were on a job interview because “you’re being interviewed all the time whether you know it or not,” and cultivating positive habits in their lives.

“Set patterns for the day that are good,” he said. “Tiger Woods is known for being disciplined. The first thing he does every morning is make his bed. I like that discipline. The first hour of my day is dedicated to God. I spend time with Him through Bible reading, prayer, and Bible study. Do that, and ask the Holy Spirit to come into your day.”

Decker’s book, “Golf is My Life,” is available for purchase from Amazon and Barnes & Noble.