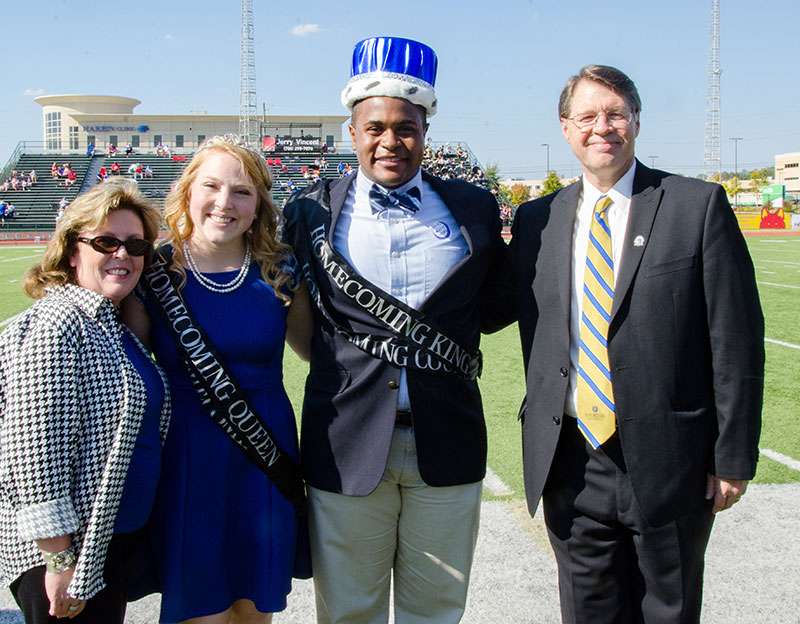 Britt, of Newnan, Ga., is the son of Mac and Trina Britt. He is a communication arts major, concentrating in journalism, and a Spanish minor. Britt is the student government association president, a resident advisor, a peer mentor, a member of Delta Sigma Phi Fraternity, a member of Order of Omega and a member of the Shorter University Honors Academy, Sigma Eta Alpha.

Wilkerson, of New Hope, Ala., is the daughter Beth Wilkerson, a New Hope Elementary School teacher, and the late James Wilkerson. She is a public relations and marketing major. Wilkerson is a member of the Shorter Lady Hawks volleyball team. She has also served as a peer mentor and as an orientation staff leader during her time at Shorter.

Britt said he believes it is an honor to serve as the homecoming king and represent his university. In addition, he is overjoyed to serve with one of his best friends.

“I’ve seen great homecoming kings during my time at Shorter, and I grateful that I get to walk in their footsteps,” Britt said. “I also believe that I share the honor with the other candidates because we’re all leaders who want to leave a legacy.”

Wilkerson was also honored that she was chosen to be the homecoming queen and is grateful for everyone’s kindness and love. She also loved sharing the moment with her mother and sister Annie Wilkerson.

“I wish there were a way to acknowledge different individuals of our entire senior class,” Wilkerson said. “Everyone is truly worthy of receiving the love and recognition I experienced during homecoming.”

Director of Student Life Cassie Thomas said Britt and Wilkerson are more than deserving of the honor.

“I think both the king and queen have made a major impact on the Shorter Community,” Thomas said.

Ledbetter College of Business Dean Honored by His Alma Mater