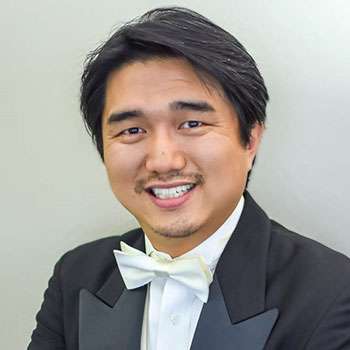 Yuman Lee, baritone, will present a faculty recital on Monday, Feb. 13, at 7:30 p.m. in Shorter University’s Brookes Chapel. Lee, assistant professor of music at Shorter, will be accompanied by Jerico Vasquez, piano. In a program called “A Night of Art Songs,” Lee and Vasquez will perform works by Schubert, Verdi, Bizet, and others. The event is open to the public with no charge.

The first half of the recital will feature German lieder by Schubert, including Lee’s favorite “Der Lindenbaum” from the song cycle Winterreise. After intermission, Lee will sing a variety of Italian art songs, followed by a set of Korean art songs that are “quite dear to him” as they were composed in the country where he was born and raised, South Korea.

The last song in the set is an oriental version of Psalm 23. When Lee was asked about why he chose this as his closing piece of the night, he said, “I want to finish my recital praising God.”

Lee is a Doctor of Musical Arts candidate at the School of Church Music at Southwestern Baptist Theological Seminary (SWBTS) in Fort Worth, Texas, and holds a Master of Music degree from the University of Southern California and a Bachelor of Arts degree in vocal arts, with a minor in piano, from Kyung-Hee University.

Lee has taught master classes, class voice I and II, private lessons, and summer camps. He served as an instructor of voice at the Woods Chapel Music Academy in Arlington, Texas. Lee was also invited as a guest artist in University of Texas at Arlington and performed two Mozart operas: Don Giovanni and Cosi fan tutte. As a recipient of James McKinney Outstanding Performer Award from the president of SWBTS, he performed with the Fort Worth Symphony Orchestra. While there, he was selected as a vocal arts honors recitalist 2009-2010, 2010-2011 and 2013-2014.

Prior to moving to Georgia, Lee served as a minister of music at Ridglea Baptist Church in Fort Worth, Texas. Lee is an active soloist, having performed across the United States.