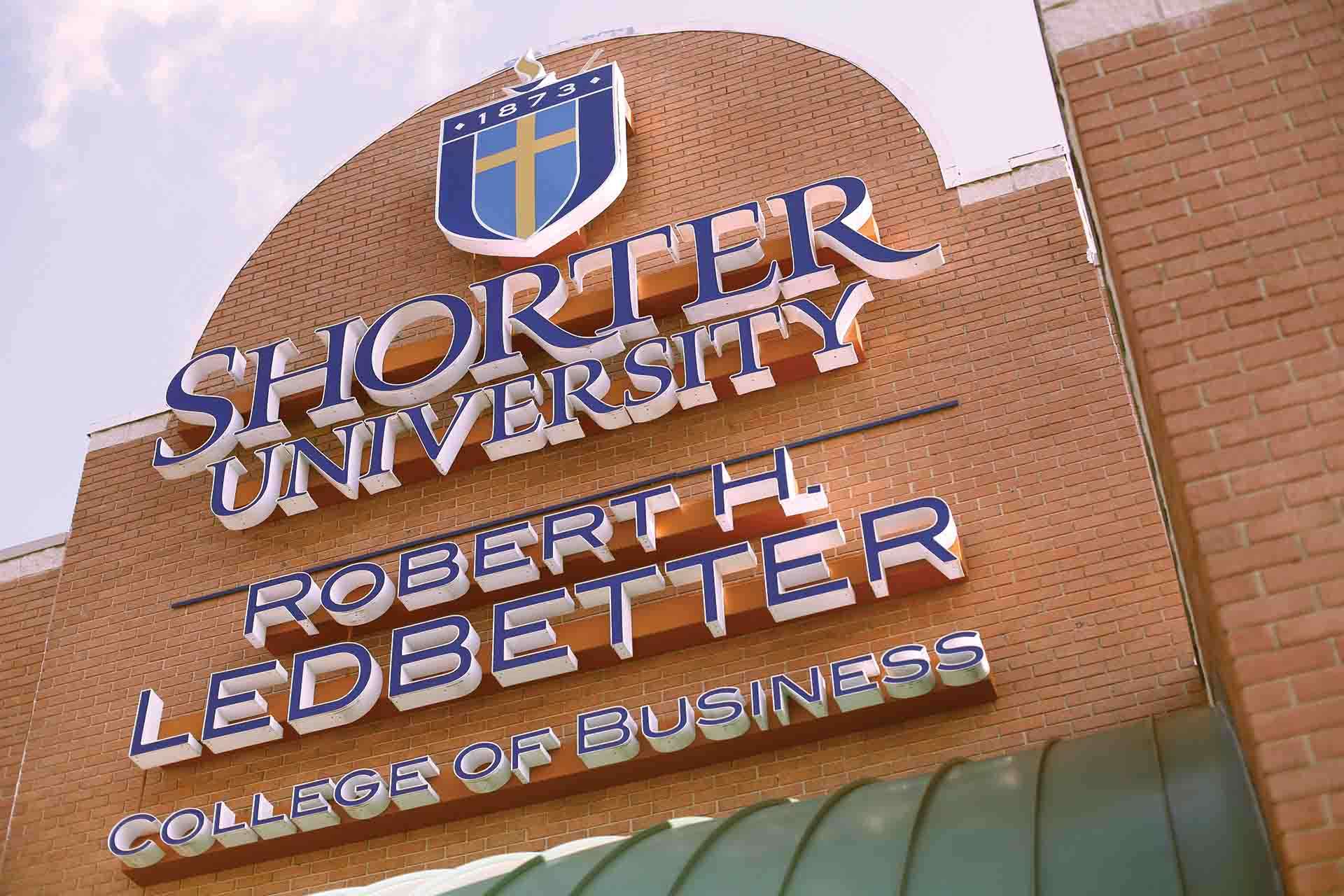 Jeanne Krueger, President and CEO of the Rome-Floyd Chamber, received the College of Business’ Distinguished Alum of the Year Award, and Kelly Bryl, Operations Coordinator at LakePoint Sports, was named the Young Alum of the Year.

“Jeanne Krueger was promoted to her current role at the Chamber in July 2019,” said Dr. Heath Hooper, Dean of Shorter’s Ledbetter College of Business, in presenting the award. “She works with determination and focus to serve fellow colleagues in their excellent Chamber work and to consistently advance the Chamber’s pro-business message while communicating a confident and constructive image through the community, member engagement and investment.”

“She works to put best sales and marketing practices in place through establishing quantifiable goals and developing strategies along with cultivating long-lasting relationships,” Hooper said.

A native of Rome, Krueger graduated from West Rome High School in 1982 and Shorter University in 1986. She has been married to Mark Krueger, a Partner at Nichols, Cauley and Asosicates for 34 years. They have two grown children.

Bryl graduated from Flagler Palm Coast High School in Florida in 2016. She played lacrosse, competed on a weight-lifting team, and ran cross country during high school. At Shorter, she played lacrosse for four years while studying Sport Management. She completed an internship with Shorter’s Sports Information Department.

After graduation, Bryl worked at Perfect Game, selling tickets for baseball tournaments. She soon began work as a Manager on Duty for LakePoint Sports while served as a Recreation Leader for the City of Acworth’s Community Center. She now handles outdoor events and employee scheduling for LakePoint, a promotion she received after only nine months on the job.

Ethan Temples received the Coca-Cola Achievement Award. Established by the Coca-Cola Foundation to provide scholarships for business students, this award is given to the rising senior who, in the opinion of the faculty, demonstrates hard work and persistence in their academic pursuits.

Harlie Barker received the Travis Williams Scholarship. This scholarship is given in memory of Travis Williams, a rising senior, business major who died in November 1998.  Travis was a free spirit who loved life and who possessed a love of learning not for the sake of knowing but in order to make a difference. The award is given in his memory to a rising senior majoring in business who exhibits the characteristics Travis lived.

Ludrick Similien received the Dentris Mathis Memorial Scholarship. This scholarship is presented in memory of College of Business graduate Dentris Mathis, who died in April 2011. Dentris was a member of Shorter’s inaugural football team and the baseball team. The award is presented to a first-generation college student athlete who possesses characteristics similar to Dentris, including a love of Christ and life, a charismatic personality, a strong work ethic, and a great pride in education and Shorter University.

Noah Hightower received the Robert Stinchcomb Memorial Scholarship. This award is given in memory of Dr. Bob Stinchcomb, who was serving as department chair and assistant professor of sport management at the time of his death in April 2018. The award is given to a sport management major who exemplifies strong faith and work ethic, generosity, and a positive spirit—the same characteristics Dr. Stinchcomb exhibited.

Alexis Sewell received the Heart of the School of Business Administration Award. This award is given by the College of Business faculty to the student who makes teaching and learning fun and who, in the opinion of the faculty, exhibits a love of life.

Founded in 1873, Shorter University is a Christ-centered, four-year liberal arts university committed to excellence in education. U.S. News & World Report and The Princeton Review annually include Shorter on their lists of best Southeastern Colleges. Learn more at www.shorter.edu.