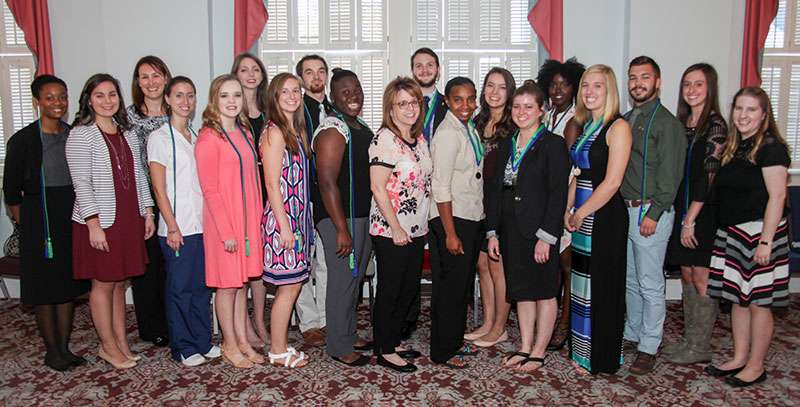 Seventeen Shorter University students were inducted into the university’s chapter of the Alpha Chi national honor society during Fall 2016. The inductees all ranked within the top 10 percent of the junior and senior classes.

Alpha Chi, whose national motto is “making scholarship effective for good,” combines high achievement in academics, good character, good models of citizenship and leadership. It is open to only top 10 percent of juniors and seniors academically. As members, students have access to scholarships and the opportunity to present at the Alpha Chi national conference.

Among general honor societies, Alpha Chi is distinctive in its commitment to involving undergraduate members in the full range of operation of the society. With chapters in 45 states and Puerto Rico, Alpha Chi is divided into seven regions that host local and national conventions in a major city of cultural or historical interest. This year the national convention is in Louisville, KY. Since the programs of these conventions feature scholarly or creative presentations by students, Alpha Chi heavily subsidizes attendance to encourage students to benefit from such an extraordinary opportunity. Shorter students have won five national awards for presentations. Most recently, at the 2016 convention, Megan Selvig won the Shakespeare award and two other students from Shorter came in a close second in their disciplines. Shorter also placed former chapter president Sarah Geil on the National Council.

The society also provides tens of thousands of dollars annually in scholarships and fellowships for its members and alumni. In recent years, the total has been more than $70,000. In 2015, two Shorter students, Sarah Geil and Ana Martin, won the prestigious national Nolle Scholarship for undergraduates and the Sledge Fellowship for graduate schools (one of only two awarded annually). In 2016, Zayne Allen was awarded the undergraduate scholarship.

The Shorter chapter’s activities have earned it recognition from the national Alpha Chi organization as a STAR Chapter for the past seven years. This means Shorter is in the top 10 percent of schools in the nation and the only STAR chapter in Georgia.

“I am very honored to work with these young academic leaders who not only excel in the classroom but also provide service to the university and community,” said Dr. Barsha Pickell, Shorter’s Alpha Chi sponsor and chair of Social Sciences. “They epitomize the best of what Shorter aspires to produce and will serve as salt and light to the world.”