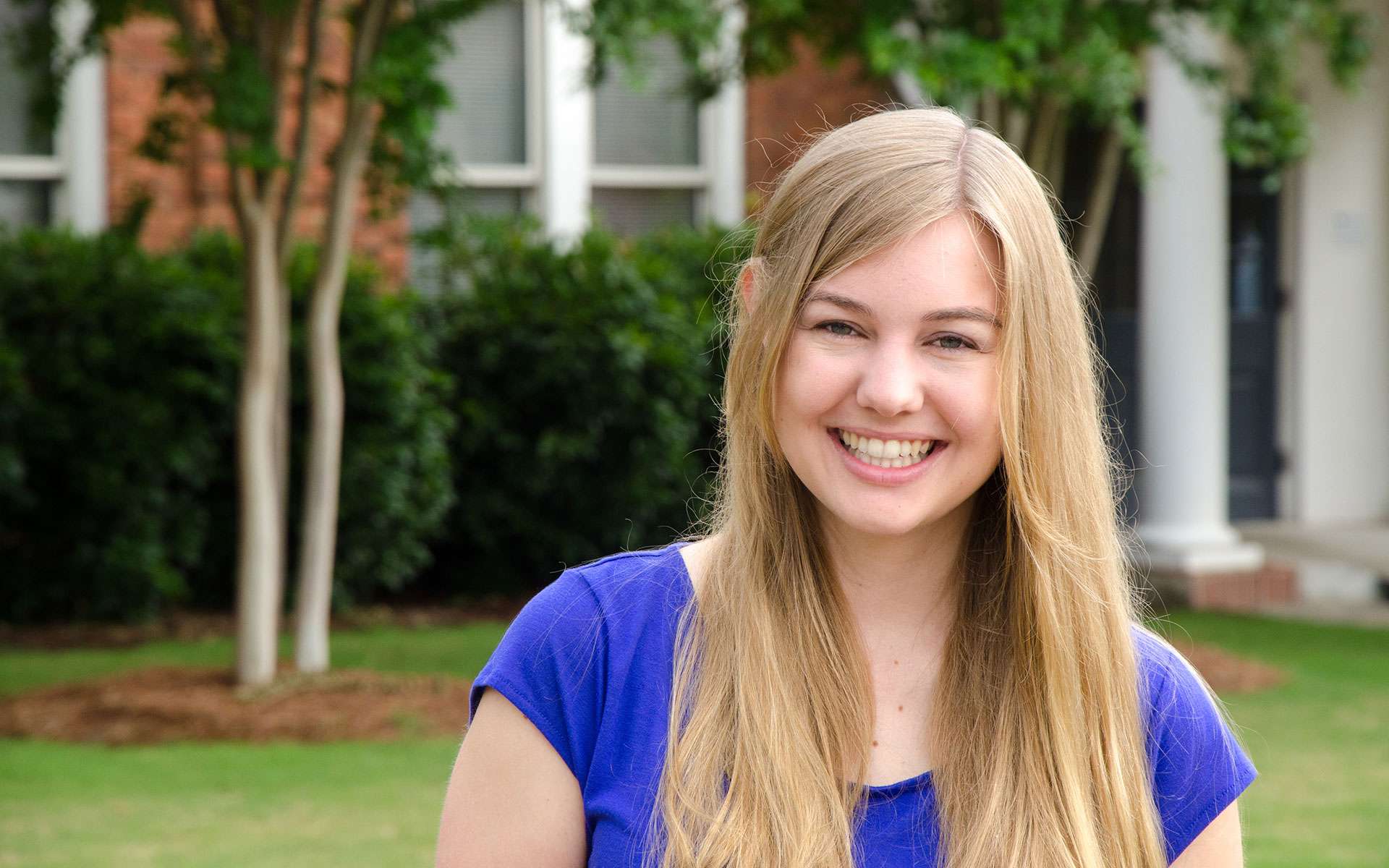 When Sarah Geil walked across the stage of the Forum on the morning of Friday, May 6, to receive her Shorter University diploma, she carried with her an impressive academic resume.

The senior from Kennesaw, Ga., earned a Bachelor of Arts, having completed the requirements for three majors and to graduate from the Honors Academy, had her research published in a national journal, and served as a student representative on the National Council of the Alpha Chi Honor Society. She also has filled important leadership roles at Shorter and been accepted into graduate school at Georgia State University to pursue a master’s degree in Rhetoric and Composition. She earned outstanding student achievement plaques during Shorter’s annual Awards Day in the areas of English, Psychology, and the Honors Academy.

“Shorter has meant everything to me,” said Geil, who graduated with majors in English, Psychology and Liberal Arts. “I adore Shorter. I’m so encouraged by professors both professionally and personally as they’ve invested in me and as I’ve made decisions for next steps.

“And then the friendships that I’ve made here are also astounding. I’m known and accepted. It’s been a great four years. The leadership opportunities around campus have been great. I’ve definitely grown up here.”

Geil dove into campus life at Shorter in her freshman year, taking part in the Hillclimbers Leadership program. She applied for a position on the Baptist Collegiate Ministries (BCM) Council, planning to serve in that role during her sophomore year.

“I was actually in the SGA ceremony being sworn in as SGA secretary for the next year and (campus ministers) Josh Pilgrim and David Roland called and said, ‘We’ve prayed, and you’re the next president.’ I said, ‘I just put down something small on my application!’”

That phone call launched Geil’s presidency of BCM, a position she has held for three years. She also has served as president of Shorter’s chapter of the Alpha Chi Honor Society for the past two years, helping it maintain its status as a Star Chapter. Geil has presented papers at the Alpha Chi national convention for three years and was selected to receive the honor society’s Alfred H. Nolle Scholarship.

“Presenting a paper at the national convention is definitely a learning experience,” she said. “I think it’s a bit addictive; I want to keep going back and sharing more because it is great to get feedback and that feedback is supportive. I presented two literature papers the last two years, and this year, I actually presented creative writing, which was a little bit different for me.

“I wrote about a church I work with here in Rome. One girl came up to me afterwards and asked if she could share it in their chapel for their college. It felt a little bit like paparazzi. It was really cool to see that even that could touch other people.”

At the Alpha Chi convention held in Chicago in 2015, Geil ran for and was elected as a student representative to the organization’s National Council.

“I was elected as region three’s representative, and region three happens to be the largest of the regions. It’s a three-year term so I’ll go this year and next year,” she said. “Each region has a voting secretary, treasurer, and student representative who serve on the National Council and come to meetings early and vote on matters that affect the whole honor society. It’s really cool that they involve students in the governance system. I’m on three committees: the strategic planning committee, the awards and honors committee, and the chapter development committee.”

The experience is invaluable for Geil, who plans to pursue a career as a college professor. “I would love to teach at a college to be just what my professors at Shorter were to me: inspiration, wisdom, kindness. That’s the ultimate end goal.

“Serving on the National Council is so incredibly helpful because it’s a look into how professors from all schools care for their students – especially these professors who are willing to go and take their students to conventions. Every decision that they make is for students and to be on the student side but to also get to help students was really exciting.”

While at the National Council meeting, Geil also had the opportunity to meet the editor-in-chief of Alpha Chi’s newly established journal of undergraduate scholarship, Aletheia, which included her research in its inaugural issue. “I submitted my capstone that I worked on for English here at Shorter to Alpha Chi’s journal. They accepted it so it went through the peer review process and has been published. I got the galley proof while I was at the convention, and I went over and showed it to the editor to say, “This is so cool, and I just wanted to let you know that all the work you’ve put into this means so much to me. It is such a fantastic opportunity for me.’ He said, ‘Wow. I’m really excited that I get to see your excitement.’ It was fun.”

The article, “A Psychoanalytical Examination of Birth Order in The Lion, the Witch and the Wardrobe,” examines the way stereotypes of birth order are perpetuated in literature.

Dr. Kathi Vosevich, associate provost, dean of the College of Arts and Sciences, and Alpha Chi advisor, described Geil as a hard worker who is intellectually gifted. “I would say that she embodies the ideals of service and learning. Her work and accomplishments prove that. I will miss her on campus, but I look forward to following her career as she quietly yet significantly changes the world for the better.”

Reflecting on her time at Shorter, Geil said that though it’s a cliché she would encourage college students to get involved. “The involvement fills the schedule, but it also fills the life. I have had so many weeks where every moment has kind of had a purpose, but that is exciting and it has given me the foundation I need to continue to get involved.”

Geil is the daughter of Mark and Amy Geil of Kennesaw.

Founded in 1873, Shorter University is a Christian university committed to excellence in education. The Princeton Review annually includes Shorter on its list of best Southeastern Colleges. Shorter University is a member of the Council of Christian Colleges and Universities (CCCU). Shorter offers traditional bachelor’s degree program in 50 areas of study, online courses and degree programs, undergraduate programs for working adults, and four master’s programs. Shorter is online at www.shorter.edu.

Digital version of the Shorter Argo yearbook is now available!