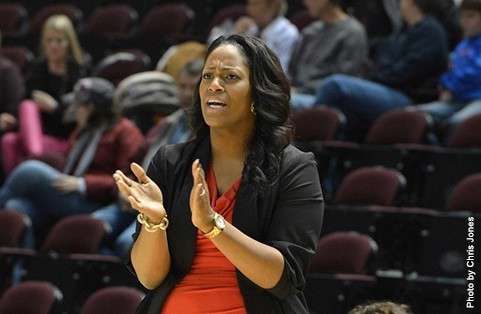 “Dawn is a tremendous coach, and we are happy to have her join the Shorter family,” said Aaron Kelton, Shorter’s interim Athletic Director. “Her experiences and success are extremely valuable. She has big shoes to fill following Coach Mitchell, but she is up to the task. Her national ties for recruiting will have a great impact, and her energy and drive to take the program to the next level is outstanding.”

“We look forward to the leadership Coach Brown will provide to our women’s basketball program,” said Shorter University President Dr. Don Dowless. “Her experience coaching and recruiting at the NCAA Division I level is a great asset. She also possesses a deep commitment to serving Jesus Christ through her work with the young women on her team.”

Brown added, “I am extremely excited about this opportunity that God has blessed me with. I asked God to direct my path, and I’m honored and ecstatic the path led me to The Hill. My goal is to make Shorter University the best women’s basketball experience in the country. We’re going to recruit at the highest level, coach and develop our student-athletes, and create a positive team culture that ultimately will help us to be successful in the classroom, the community and on the court. My goal is to build a championship program fast, very fast. Words alone are not enough to express my gratitude for the display of confidence shown in me by Dr. Don Dowless, President, and Aaron Kelton, Director of Athletics. I will work diligently to show them my gratitude instead. I look forward to the challenge and expectations of making the Shorter Lady Hawks a major factor in the Gulf South Conference.”

Brown served as head women’s basketball coach at Prairie View A&M, where she headed the NCAA Division I program after serving as interim head coach and an assistant. In 2014, she guided Prairie View to its fourth consecutive Southwestern Athletic Conference tournament championship and fourth consecutive NCAA Division I Women’s Basketball Tournament appearance. She was named the 2013-14 HBCU Digest Female Coach of the Year. In 2014-15, Brown coached the Lady Panthers to first-ever victories over the University of Houston and Sam Houston State. Brown built a reputation as one of the nation’s top Division I recruiters by recruiting and coaching several talented players.

Previously, Brown spent four years as an assistant coach at Tougaloo College, where she helped the Lady Bulldogs finish the 2009-10 season with their best record in 12 years and advance to the semifinal round of the Gulf South Conference tournament. A graduate of Jackson State University, she earned a bachelor’s degree in sociology and had a two-year career as a student-athlete, helping lead the Lady Tigers to a SWAC regular season co-championship and a SWAC Tournament semifinal berth. She was two-time captain at Atlanta Metropolitan College, leading the team to two consecutive GJCAA tournament appearances and playing as part of the inaugural team in 2000.