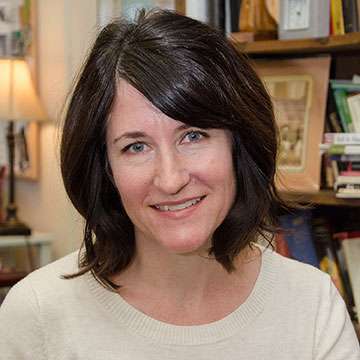 Rome, Ga — Angie Crea O’Neal, the Joan Alden Speidel Chair in English at Shorter University, will celebrate the launch of her poetry collection, The Way Things Fall, during a book release on Tuesday, Oct. 10, at 6 p.m. in Shorter’s Arnold Art Gallery. The event is open to the public at no charge.

Dr. O’Neal, who also serves as associate professor of English and chair of the Department of English, Modern Languages and Liberal Arts at Shorter, will sign copies of her book for $10 (cash or check only). Light refreshments will be served.

This collection is about waiting, surrendering, and rediscovering joy and awe in the midst of a fallen world. It explores life and the consequences of living¾aging parents, broken hearts, even growing children. The collection takes inspiration from Romantic poetry, astronomy, nature, and motherhood, and chronicles what it means to live and lose and what exists in the wake of our losses.

“The collection balances on this fulcrum as it explores parenting, marriage, faith, even the beauty of childhood, incandescent but also scraped and wild,” according to Maggie Blake Bailey, author of Bury the Lede. “O’Neal invites the reader to ‘swing on the/branches of unknowing,’ while also acknowledging that ‘[s]ometimes the wrong thing gets broken.’ The real power of this collection comes from the beauty in that brokenness.”

Dr. O’Neal is also co-chair of Shorter’s QEP and is an active member of Seven Hills Fellowship in Rome, where she teaches third through fifth graders and co-leads a community discipleship group. Dr. O’Neal has presented at a number of conferences, including the International Conference on Romanticism, British Women Writers Conference, and a young women’s conference at Northrise University in Zambia. She has two daughters, Marin and Maeve.