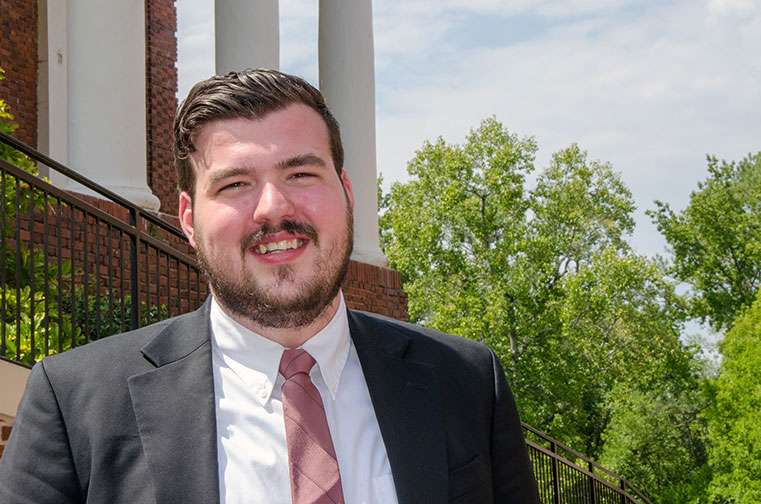 Shorter University English major Zayne Allen is on the road to success thanks to an internship he completed with Enterprise, the largest transportation solutions provider.

Allen was one of 45 interns selected to work in the state of Georgia during the summer of 2016. His success in that role and during the intervening months have earned him a full-time position with the company’s management trainee program in East Tennessee, which he will begin after he graduates from Shorter University on Friday, May 5.

“The story is full circle,” Allen said. “I was really attracted to the internship program by what they are about. Enterprise is about serving customers and strengthening the community in any way they can and then just treating employees well.”

Allen added that he was also impressed with the company’s commitment to providing a career path for their employees. “They do all of their promotions from within. If there’s ever a higher position open, somebody that’s within the company will get it. That’s cool for two reasons. Number one, you never have to worry about someone coming in from the outside and taking a position that comes up. Number two, you know that any person that has a position above you – even our CEO – she was once doing the same thing that we did on our first day,” he said.

To earn a spot as an intern, Allen went through an extensive series of interviews and was thrilled when he was one of 45 selected from the hundreds who applied. “If I’m not mistaken, I was the only intern that came on in Georgia that did not have a business-related major. The things I’ve learned as an English major are good communication skills, how to give a good presentation, how to write properly, how to get ideas and bring them to fruition, but also how to problem solve and to think critically. When it comes to sales, I understand how people think because literature gives you glimpses into people’s minds. The more you study it, the more you understand how people think, you understand how people respond, and you understand how your words affect people. When you’re coming to make someone aware of a product they might not know they need, it’s very good to be able to communicate that to them.”

Allen added that was well-prepared for the position thanks to Shorter’s English faculty, which is comprised of scholars who also have real-world experience. “The English faculty members prepare you not only to understand literature but also the reason you’re understanding literature – for real life. The goal is not learning this just to teach the next people because why are you teaching them? You teach them so they can benefit society.”

During his time as a student, Allen has already been involved with organizations who share the aim of benefiting society. He played electric bass in the chapel worship band at Shorter, served as president of the Sigma Tau Delta English honor society, and was a member of the Alpha Chi national honor society and the Shorter Honors Academy. This year, he also played a role in the Shorter theatre department’s production of “Hamlet.”

He recently completed defense of his capstone papers for both his English major and the Honors Academy. A draft of the paper was submitted by Shorter to Alpha Chi for the national organization’s scholarship competition; he was one of 10 students selected to receive the prestigious Alfred H. Nolle Scholarship, which carried a $1,500 prize.

Allen exhibited that same excellence during his internship with Enterprise. “The internship experience was so competitive, both before you get the opportunity and during. I think Enterprise really benefits from the competitive spirit that everybody has. We were judged based on our sales, customer service scores, turning assignments in on time, or a car sale for example. All of these things went into a matrix that scored us against each other. It was really cool. You weren’t just coming into work. You were coming in and trying to be the best but you still loved everyone else. It was good, friendly competition. I did well – not as well as I would have hoped – but I finished sixth out of the 45. Top 10 was at least my minimum goal.”

Allen, a native of Ocala, Fla., credits his parents, Nelson and Hope Allen, and siblings, brother Micah and sister Sylvia, for being supportive of his success.

“My parents have definitely been some of the most supportive people that I can possibly imagine. I feel really respected by them. They know that they raised me in a way that I can think very critically and even when I make mistakes I can be like ‘Okay. I’ll learn from it. I’ll be good.’

He added, “I think it’s kind of cool, coming from there (Ocala, which is located off I-75) and seeing how life’s turned out. It’s been one long road, and it’s one that I’ve been very happy to travel. I have people who’ve been good to me, like the people at Enterprise, my family, the friends I have at school, and the professors for sure; I know they are probably going to be a part of my life even when I leave.”