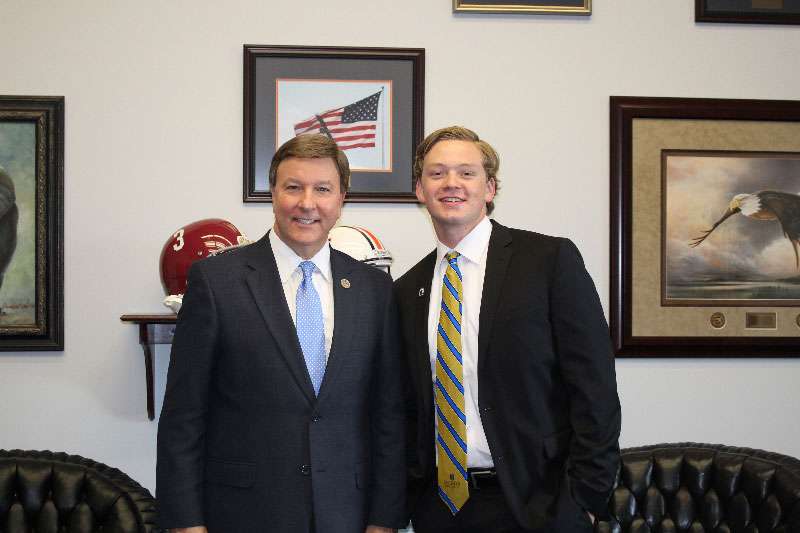 Rome, Ga. — Shorter University graduate Aaron Harper went from the university’s campus, lovingly known as The Hill, to Capitol Hill for a summer internship in the office of Congressman Mike Rogers (R-AL). As he served as one of four interns, Harper gained experiences that are already proving beneficial as he begins work on his law degree at Faulkner University Law School in Montgomery.

“Coming from Rome, Georgia, to a big city like Washington, D.C., is fantastic,” Harper said in an email interview this summer. “There is always something happening, even in our office building (the Rayburn Office Building, which is where Congressman Rogers’ office is). Just the other day, I met Congresswoman Karen Handle, who was recently elected in the most expensive campaign ever. Ben Shapiro, who is a famous political editor, writer and commentator for ‘The Daily Wire,’ testified before Congress right down the hall from my office. I even got the chance to meet Rick Harrison, who got famous through his widely popular show on the History Channel called ‘Pawn Stars.’”

The majority of the work of the interns was answering phones and talking with constituents, Harper explained. “We also ran bills to different committees and helped give tours, but it was mostly comprised of answering phones.

Harper said the experience allowed him to put into practice the principles he had experienced firsthand in his interactions with faculty at Shorter. “A lot of the internship is interacting with constituents. Whether those interactions are over the phone or in the office, we want to treat them respectfully. There was never a time when I went into a professor’s office at Shorter and they did not treat me with respect. I think that goes a long way when building relationships, which is what we want to do with our constituents.”

Harper is the son of Rev. David Harper, chair of the university’s Board of Trustees, and Mrs. Beverly Harper, a Shorter graduate who serves as administrative assistant to the dean of Shorter’s School of Fine and Performing Arts. His brother, Andrew, is a 2014 graduate of Shorter University. Aaron received his Bachelor of Arts degree from Shorter at the end of August with a major in history and a minor in education.

He returned home from Washington, D.C., in August to find he had been called off the waiting list to begin law school at Faulkner University. He quickly made the decision to accept the offer and relocate to Montgomery. Of the future, Harper said he would like to work in politics, working his way up to being a Legislative Assistant to a Congressman.

Dr. Justin Pettegrew, associate professor of history, said he expects to see great results in Harper’s future. “Aaron was a naturally intelligent student whose academic prowess improved throughout his years here at Shorter. He was particularly gifted at oral presentations and he was a leader in group discussions. No doubt, his internship for Congressman Mike Rogers provided Aaron with real-world experience that helped him gain entrance to law school and will help him as he studies law. I’m excited to see how the Lord will use Aaron to impact America in the years to come.”

Dr. Charles Charter, assistant professor of history at Shorter, agreed. “I have been privileged to instruct Aaron in several courses at Shorter University and consistently found him to be a sharp thinker, a fair and balanced judge of published scholarship, a clear and cogent writer, and an articulate discussant. I am sure he will excel in his pursuit of law studies.”