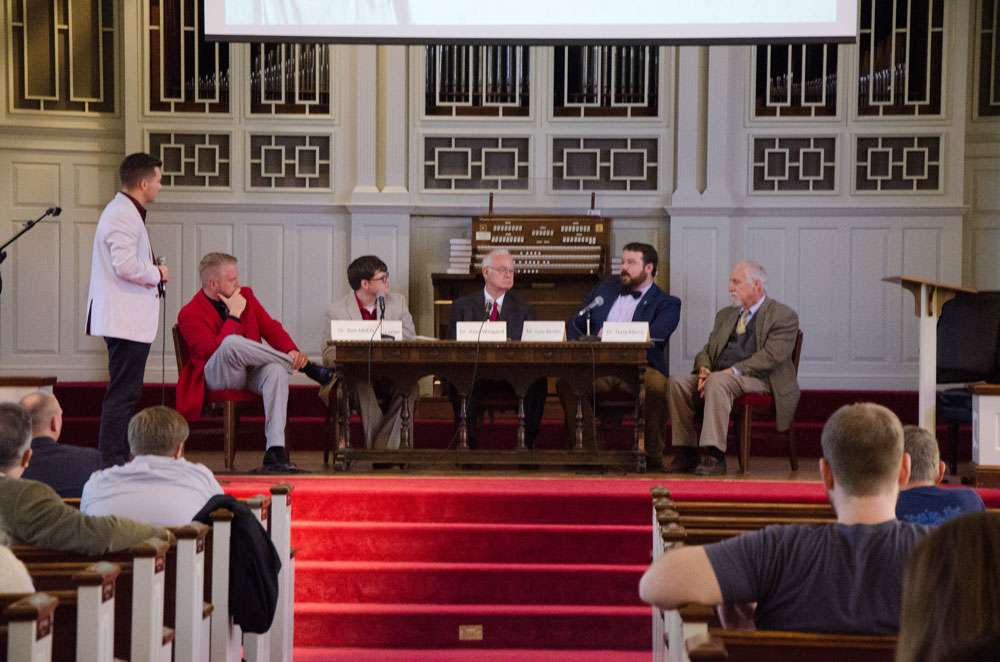 Rome, Ga. – An afternoon of academic presentations at Shorter University marked an important historic milestone as Shorter’s Department of Social Sciences and Department of Christian Studies joined together to celebrate the 500th anniversary of the Reformation.

View a gallery of photos from the event.

“The event was a complete success,” said Dr. Jared Linebach, assistant professor of criminal justice and chair of the Department of Social Sciences. “When I surveyed the audience, I noticed that we had a pretty good mixture of students, faculty, and community members.”

The event celebrated the day Martin Luther nailed his 95 theses to the door of the church at Wittenburg and examined the impacts that event, and the Protestant movement it started, have had on the modern world.

Presenters included Christian studies major Alton Chambers, who opened the proceedings with a paper titled “Orienting Ourselves to the Reformation.”

Faculty presenters were Dr. Charles Carter, assistant professor of history, who spoke on “Technological Features of the Protestant Reformation”; Dr. Terry Morris, professor of history, who examined “The Role of the Reformation in the Coming of the Modern World”; Cory Barnes, assistant professor of Christian studies and chair of the Department of Christian Studies, whose topic was “Presbyterians and Lutherans and Baptists, Oh My!: Denominationalism as a Legacy of the Reformation”; Dr. Alan Wingard, professor of music and dean emeritus of Shorter’s School of Fine and Performing Arts, who examined “Martin Luther’s Continuing Impact and Influence on Sacred Music”; and Dr. Benjamin McFry, associate professor of English and German, who discussed “Faith, Work, and Solitude: Luther’s Translation of Romans 3:28 and Its Impact.”

The session ended with a panel discussion featuring all of the presenters, which was moderated by Christian studies major Nathan Gaydosik.

“The presentations by the student and faculty were exceptional,” Dr. Linebach said. “Presenters clearly conveyed the essence of the Protestant Reformation as initiated by Martin Luther. We were able to get a sense of the event 500 years ago, the culture of 500 years ago, and the effects of the event that we are still impacted by today. Questions asked of the panel at the end of the program were thought-provoking and showcased our faculty’s extensive knowledge of the Protestant Reformation.”