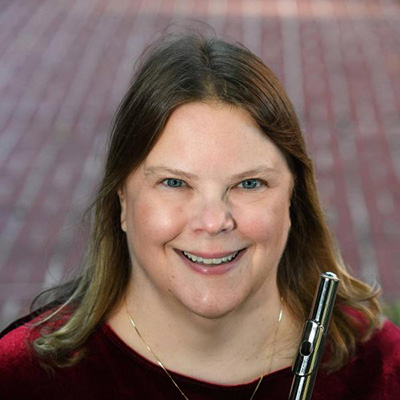 Dr. Ronda Benson Ford is currently instructor of flute at the Shorter University, the University of Tennessee at Chattanooga, and the Cadek Conservatory of Music.

She has performed at National Flute Association Conventions, Regional Flute Festivals, and College Music Society regional conferences. Ronda was a participant in the Galway Flute Institute in the summer of 2021 where she performed in masterclasses for Lady Jeanne Galway and Nicola Mazzanti. She has also played in masterclasses for Göran Marcusson, Walfrid Kujala, Gary Schocker, and Louis Moyse.

Ronda collaborates with many other musicians and frequently performs compositions that were commissioned by her. Fuze Trio is a cutting-edge chamber music ensemble featuring Ronda Benson Ford, flute, Erika Schafer, trumpet, and Jenny Parker, piano. The group performs eclectic repertoire from commissioned world premieres and other modern compositions to arrangements of traditional classical music and popular music, including arrangements by group members themselves. The group had its inaugural performance at the University of Tennessee at Chattanooga in February 2018, premiering its first commission—Michael Broder’s Con ritmo. In January 2020 they were an Ensemble-in-Residence at East Carolina University as part of the North Carolina NewMusic Initiative. Other performances include the 2019 College Music Society South Central Conference at the University of Texas at Tyler and recitals throughout the Southeast. Ronda has taught a wide variety of classes including Flute Literature, Flute Choir, Music Theory I-IV, Music Theory for non-majors, Aural Skills I-IV, Music History, and Music Appreciation.