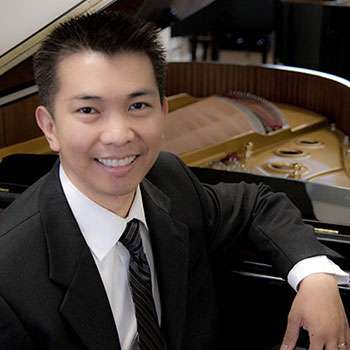 Hailed for his “formidable and effortless playing” and “intelligent ardor and exceptionally clear and bright technique,” pianist Jerico Vasquez is Artist-in-Residence / Professor of Music and Coordinator of the Keyboard Program at Shorter University in Rome, GA. Recognized as an official Shigeru Kawai Artist, he has performed as a concerto soloist, recitalist, and collaborative musician in Canada, Europe, the Philippines, and the United States, including recitals in California, Illinois, Michigan, Minnesota, North Carolina, South Carolina, Texas, Oklahoma, and all over Georgia.

Recent performances include a solo recital at the famed Ayala Museum sponsored by the Manila Chamber Orchestra Foundation and Lyric Piano, masterclasses for the Piano Teachers Guild of the Philippines, solo recitals for the Piano Technicians Guild Convention, the Kirk Concert and Masterclass Series, the Bunny Just Music Festival, a concerto performance with the Rome Symphony Orchestra, and chamber music performances with the Balkan String Quartet and the Expedition Winds. An avid vocal collaborator, he has worked with singers Indra Thomas, Ann Cravero, Cynthia Wohlschlager, Deborah Popham, Eric McCluskey, Rianne Marcum, Chuck Chandler, and most recently with Yuman Lee performing Schubert’s Winterreise on a tour of Georgia, Oklahoma, and Texas. A CD of this collaboration was released in October 2020.

Dr. Vasquez received his Bachelor of Music degree under Dr. Charles Asche at the University of California, Santa Barbara, and his Master of Music and Doctor of Musical Arts degrees in Piano Performance, with a Minor in Music History and Literature, from the Moores School of Music at the University of Houston under Ruth Tomfohrde, and eminent pianists Abbey Simon and Horacio Gutiérrez.