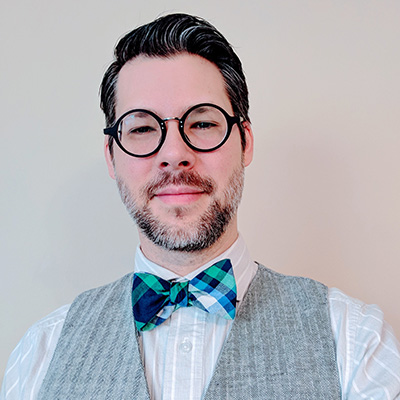 Most of Dr. Jacobus’s recent research centers on music theory pedagogy or ludomusicology. However, he maintains interests neo-Riemannian theory, graphical representations of harmonic and pitch-class spaces, sixteenth-century polyphony, plainchant psalter singing, and music in film and television. Dr. Jacobus has presented papers at the North American Conference on Video Game Music, Music Theory South East and South Central Societies, the International Conference on Music since 1900, and Music and the Moving Image. He has been published in Engaging Students: Essays in Music Pedagogy, Musicology Research, and has produced resources for lay audiences on the singing of Anglican plainchant psalters.

Dr. Jacobus loves to engage in the drinking of loose-leaf teas, the playing of table-top and video games, the wearing of bow ties, the reading of books, and the playing of ukulele and hurdy gurdy. He lives in Lindale, GA with the love of his life, Celia, and sons, Alec, Rafe, and Charlie.