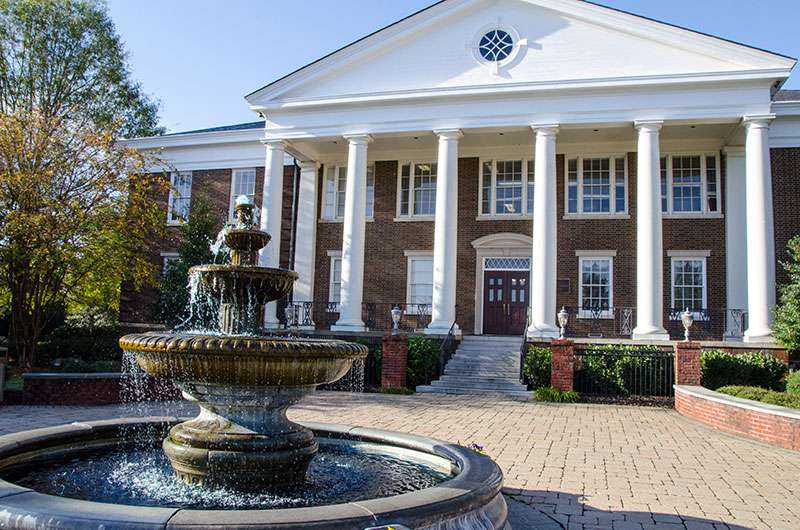 Shorter University will host a photography sale featuring more than 300 photographs by Assistant Professor of French and English Dr. Fabrice Poussin. The sale will be held March 21-24 in Shorter’s Fitton Student Union from 10 a.m. to 3 p.m. each day. The public is invited.

The sale, the proceeds of which will be used for special projects within the Department of English, Modern Languages, and Liberal Arts, will include photographs of the Shorter campus and the City of Rome, as well as others taken in France, England and the Eastern and Southwestern United States. Double-matted 8×10 prints are available for a minimum donation of $5, with 11×14 prints priced at $10. Anyone donating above the minimum price may have their print signed by the artist.

“We are grateful to Dr. Poussin for donating so much of his time and his beautiful work for the benefit of our department,” said Dr. Angie O’Neal, who holds the Joan Alden Speidel Chair in English and serves as associate professor of English and chair of the Department of English, Modern Languages, and Liberal Arts. “This fundraising allows us to bring writers with a national reputation to our campus as well as provide student activities and awards and hopefully, one day, study abroad scholarships. We are excited to serve our students with events like this and to see God’s faithfulness in action!”

Dr. Poussin is well respected as both a photographer and a writer. He wrote his first novel, in French, when he was 16 and published it two years later. In November 2015, he and the English department organized a fundraising effort using his photographs to raise money for the spring release party of The Chimes, Shorter’s award-winning literary magazine.

“The event was successful and was the little push necessary for me to try my hand at publishing some of my photographs,” Dr. Poussin said. “Christmas break was the perfect opportunity and armed with a laptop, I practically moved into the local Starbucks, sought out literary and art magazines and began making the rounds.”

Dr. Poussin said he considers himself fortunate given the response. He has had more than two dozen photo publications and eight poems accepted. In addition to appearing in The Chimes, Dr. Poussin’s work was accepted by Kestrel, The San Pedro River Review, The Front Porch Review, Foliate Oak Magazine, Ancient Paths Magazine, Eskimo Pie Literary Review, The Stray Branch Literary Magazine, Gnarled Oak Magazine, and Five on the Fifth. In addition, some of his poems will appear in an anthology named Secrets and Dreams, which will be published by Kind of a Hurricane Press.

Having developed an interest in both photography and writing at the age of 14 when he purchased his first 35mm camera, Dr. Poussin now owns an arsenal of cameras from Cannon to Leica, Rolleiflex to Sinar and works outdoors and in the studio to produce as broad an array of images as possible.

“Mostly I look for the details, the unusual: rust on a nail, chipped paint on a window sill, a leaf in a water fall, ready-made still lives, sunsets, dunes, sunrises,” he said.

Having traveled in nearly 20 countries on four continents, on top of train cars, in a hot air balloon, and in an ultra light airplane, Dr. Poussin said he has captured some images not every photographer can make. “My goal is simple, to bring something new to the eye of the viewer, something he cannot see, does not have time to see, or missed on his own. Perhaps, the viewer will learn to slow down and look for those details.”

In addition to the photography fundraiser, the English department will host a game night on Monday, March 21; a storytelling and crafts night on Tuesday, March 22; and “The Chimes” release celebration on Thursday, March 24.

Founded in 1873, Shorter University is a Christ-centered, four-year liberal arts university committed to excellence in education. The Princeton Review annually includes Shorter on its list of best Southeastern Colleges. Shorter is a member of the Council of Christian Colleges and Universities (CCCU). The university offers traditional bachelor’s degrees in 40 areas of study, online courses and degree programs, undergraduate programs for working adults, and four master’s programs. Learn more about Shorter at www.shorter.edu.