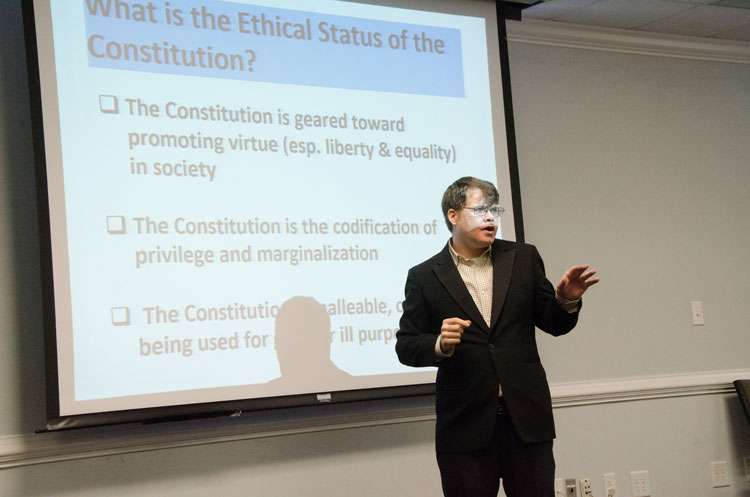 Dr. Charles Carter, assistant professor of history, delivered the keynote speech, “Ethics and the U.S. Constitution.” In his remarks, he outlined the historical context for the writing of the Constitution, describing the document being born during a time that had seen fighting of many kings in Europe. “The writers of the Constitution sought to avoid this tyrannical form of government so they created a system of checks and balances,” Dr. Carter explained.

He pointed out that the U.S. Constitution, written in 1787, is the oldest surviving constitution in the world. “Some countries have had four or five constitutions in the lifespan of ours,” he said. “Ours is a great testament to the ingenuity and foresight of the founders.”

Addressing the ethical status of the Constitution, Dr. Carter highlighted three common views that categorize the Constitution as being geared toward promoting virtue in society or as being the codification of privilege and marginalization or, finally, as being “malleable, capable of being used for good or ill purposes.”

The third is probably most in line with reality,” he said. “The Constitution is malleable and its power depends on the moral character of judges, of elected officials, and of the people.”

Students were given opportunities to engage in the event by quoting the Preamble to the Constitution and by answering Constitution-related questions.

Constitution Day is an important annual event for Shorter University, according to Dr. Jared Linebach, assistant professor of criminal justice and chair of the Social Sciences Department. “As a liberal arts institution, it is our duty to share the rights and responsibilities of an active citizen with our students,” he said. “The rights and responsibilities as identified in the U.S. Constitution are the starting point for that conversation. Constitution Day presents a universal opportunity to shed light on the importance of a well-informed citizenry.”

View a gallery of photos from the event.

Founded in 1873, Shorter University is a Christ-centered, four-year liberal arts university committed to excellence in education. U.S. News & World Report and The Princeton Review annually include Shorter on their lists of best Southeastern Colleges. The university offers traditional bachelor’s degrees in 40 areas of study, online courses and degree programs, undergraduate programs for working adults, and master’s programs. Learn more about Shorter at www.shorter.edu.