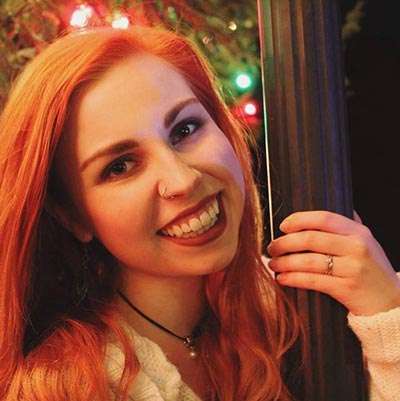 Abigail has designed for productions of “1776”; “You’re A Good Man, Charlie Brown”; “Tuck Everlasting, The Musical” (2018 KCATCF Faculty Costume Design Nomination); “Exit the King” (2017 KCATCF Faculty Costume Design nomination); “Children of Eden”; “Into the Woods”; “Annie Get Your Gun”; “Shrek: The Musical”; Shakespeare’s “As You Like It” and “Much Ado About Nothing”; “Hansel and Gretel”; three seasons of  “Liberty Mountain: A Revolutionary War Drama” in Kings Mountain, NC; and many other productions.

Some of her favorite performing roles have been Jennyanydots (CATS), Joanne (GODSPELL), Mary Tilford (THE CHILDREN’S HOUR), and the Witch (HANSEL AND GRETEL). She has worked on productions with The Liberty Mountain Company, Rome Shakespeare Festival, The Children’s Theatre of Charlotte, Gaston School of the Arts, Encore Theatre Guild, and The Abbey Players.

Abigail likes to drink coffee, cook, sing in the Shorter Chorale, read, and travel. She and her husband, Kyle, who also works at Shorter, live in Rome.