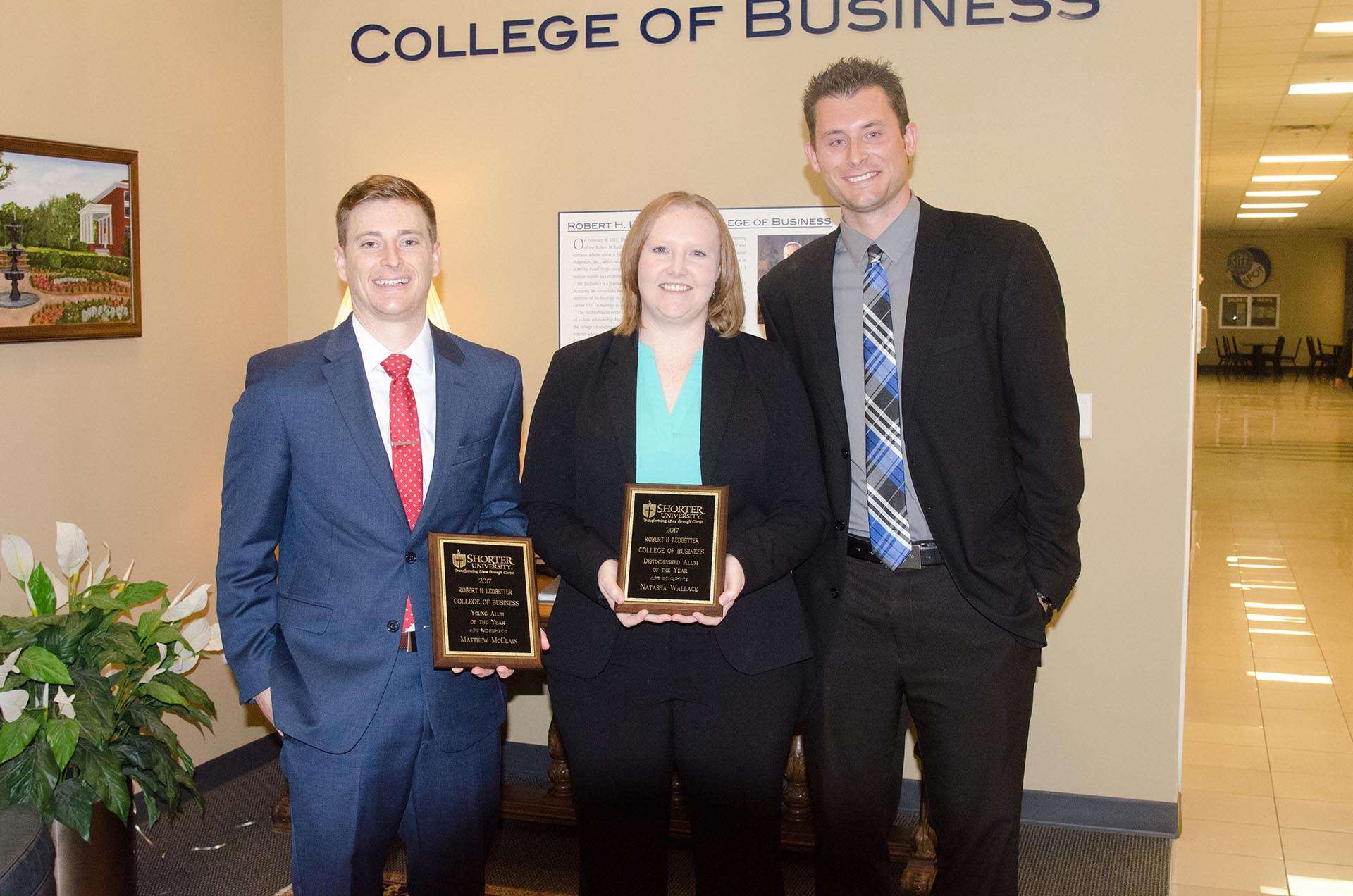 “Shorter University and the Ledbetter College of Business are very proud of these two achievers in their respective areas,” Dr. Hooper said. “Both Matthew and Natasha exhibit outstanding success and model many business principles on a daily basis. I am very excited to see how they continue to advance in their careers!”

After graduating, Wallace moved to the Arizona border, where she worked as an Intelligence Assistant for the Department of Homeland Security, Homeland Security Investigations assisting on cases pertaining to alien, narcotic, weapons and cash smuggling as well as child pornography and human trafficking cases. While there, she became the liaison between several federal, state, and local law enforcement agencies aiding in the construction of a collaborative approach to mitigating threats and creating safer border communities. She was awarded several accolades by the Department of Homeland Security in recognition of her superior service, including a personalized gift by an elite Native American tracking group for providing real-time intelligence during counter-smuggling operations.

After a couple of years and sequestrations later, Wallace’s intelligence program dissolved; therefore, she put her business expertise to work and began working at an all-inclusive community health center, assisting in accounts receivables and annual federal audits. Not long after, she found her way back to Georgia, and began working as a federal contractor for the United States Attorney’s Office in Savannah. While there, she conducted financial investigations to collect federal restitutions, obtaining over $500,000 for victims of crimes.

McClain is completing his first year as the event manager for the Memphis Grizzlies and FedExForum, supervising and directing the staffing, production, operations, and the event execution of all major concerts and events for the FedExForum. He also serves as the arena liaison to the University of Memphis for all of their Division I, men’s basketball games, which are held at the FedExForum.

Over a 10-year event and facility career, McClain gained experience in event operations, production, booking, and guest services. Before joining the Grizzlies, he spent over 3 years as the Event Manager and Director of Guest Services for the Broadmoor World Arena and Pikes Peak Center in Colorado Springs, CO, home to the Division I – National Collegiate Hockey Conference’s Colorado College Tigers, and the Colorado Springs Philharmonic.

Prior to his first stint in Memphis, McClain managed The Coliseum at the University of West Georgia as the interim director of events. His background also includes working for the Haralson County (GA) Recreation Department.

An active member in the International Association of Venue Managers (IAVM), this past year he was selected as a recipient of IAVM’s 30 Under 30 award. A native of Buchanan, Ga. McClain lives in the suburbs of Memphis, Tenn., with his wife Claire.