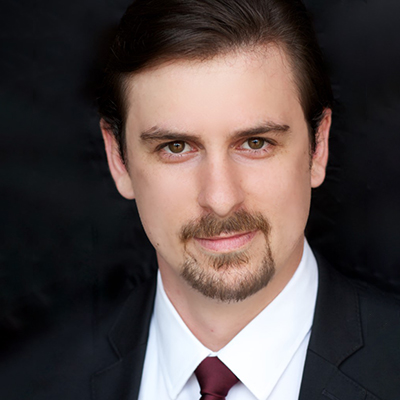 Chair of Theatre and Musical Theatre, Director of Opera, and Assistant Professor of Voice

Timothy Renner serves as Chair of the Department of Theatre and Musical Theatre, Director of Opera Theatre, and Assistant Professor of Voice in the Edith Lester Harbin Department of Music at Shorter University. He is a member of the National Association of Teachers of Singing.

An active international performing artist, Timothy is a graduate of the prestigious Academy of Vocal Arts in Philadelphia, PA. His recent professional engagements include Moralès in Carmen with Palm Beach Opera (2022), Escamillo in Carmen at the New National Theatre Tokyo (2018), Zurga in Les pêcheurs de perles with Opera Tampa (2019), and Marcello in La Bohème with the Lyric Opera of Kansas City (2019). As a resident artist at AVA (2016–2020), Timothy performed the title roles in Rigoletto and Rubinstein’s The Demon, as well as di Luna in Il trovatore, Germont in La traviata, Alberich in Das Rheingold, the Music Master in Ariadne auf Naxos, and Alphonse XI in La favorite, as well as a variety of song literature and sacred works.

A native of Virginia, Timothy earned his Doctor of Musical Arts in Voice Performance and Literature from the University of Illinois at Urbana-Champaign, where he studied with Jerold Siena. His cognate was in accompanying, studying under Dennis Helmrich and Julie Gunn. While studying at UIUC, he was also on faculty at Eastern Illinois University, where he served as Director of Opera and Musical Theatre, Director of University Mixed Chorus, and applied voice faculty. Timothy also holds a Bachelor of Science in Music Education and Master of Music in Church Music from Bob Jones University in Greenville, SC. He has studied voice with Jean Greer, Stan Eby, and most recently, Bill Schuman.

Timothy also serves as Director of Classic Music Ministry at First Presbyterian in Rome, GA, where he lives with his wife Hillary, a registered nurse, and young daughters Eleanor and Lena Rose. They also have a small dog whose name is Kevin.