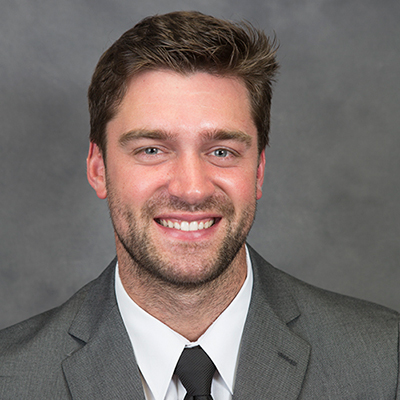 Mr. Conkle is from Fort Payne, AL. He spent his undergraduate years at Pensacola State College, Darton State College, and the University of North Alabama, which he graduated from in 2015. He played baseball for each institution as a First Baseman/Pitcher. He then went on to pursue his Master’s in Sports Management at the UNA and graduated from UNA in 2017. Following receipt of his Master’s in Sports Management he pursued an additional Master’s in Theological Studies at Liberty University, which he graduated from in 2020. He is currently seeking a PhD in Sport Management from Troy University where he most recently served as a Doctoral Graduate Teaching Assistant in the School of Hospitality, Sport and Tourism Management.

During his time at UNA, Mr. Conkle first worked as an intern for the UNA Athletic Department followed by serving as a Graduate Assistant for Game Operations and Special Events. He was then promoted to Assistant for Game Operations and Special Events and eventually elevated to Manager for Athletic Operations and Facilities. In this role, he aided in UNA’s transition to Division I through facilitating the strategic plan, served in project management for multiple renovations in historic Flowers Hall, hosted various Athletics Championships including the Division II National Golf Championship at Robert Trent Jones of the Shoals, and was oversight for all game day and facility processes. Additionally, he coordinated the Connect1 Program which was designed to raise awareness for individuals struggling with suicidal thoughts through building interpersonal relationships and encouraging face to face interaction, and received the 2016 NCAA Division II Award of Excellence for its mission and efforts.

While serving as an adjunct instructor in the Health, Physical Education and Recreation Department at UNA, Mr. Conkle discovered a passion for teaching and having the opportunity to impact the lives of students. He is excited to carry out Shorter’s mission of “Transforming Lives through Christ” by integrating faith into the curriculum. He believes the Christian worldview should influence how one understands competition, coaching philosophy, the concept of group dynamics and the use of abilities; therefore, it should shape the purpose and meaning of sports. His research interests include political skill, cultural intelligence, burnout, transformational leadership, well-being, and self-determination theory.

Mr. Conkle is married to the former Callan Buck of Keller, TX, who served as a Diver for the University of Alabama, which she graduated from in 2014. He lists traveling, spending time with family/friends, church and the outdoors as other activities he enjoys and participates in regularly. His favorite bible verse is Philippians 2:3, “Do nothing from selfish ambition, but in humility consider others more significant than yourselves.” He is extremely excited to be a part of the Shorter University family and looks forward to everything this calling has to offer!