Hello from the Hill!

Welcome to the July issue of SU Insider!

Summer Orientation sessions are in full swing, and #ShorterLOVES welcoming new students to the Hill. We hope this clip from the SOS skit brings back fun memories!

And speaking of memories, make plans now to join us for Homecoming: The One Where the Hawks Fly Home on October 15 and 16. You’ll have a chance to reflect on good memories and make new ones! Mark your calendars, and we’ll share more details soon.

Nominate a Shorter alum for one of our 2021 Distinguished Alumni Awards! These awards are given to honor outstanding professional and personal accomplishments and dedicated service to both community and Shorter University. Celebrate your fellow alumni by submitting a nomination today! The deadline is Friday, September 10.

Check out the full issue of SU Insider for more news including our relaunch of Alumni News!

A crew led by Shorter alumni Paul and Mistee Smith (of Smith Construction) is hard at work renovating our General Chemistry Lab into a state-of-the-art learning space. This is the fourth of our science labs to be renovated since 2016; we have also completed renovations of the Microbiology/Anatomy and Physiology, Plant Sciences, and General Biology laboratories.

Another exciting SUForward project taking place soon will be the installation of new turf at Ben Brady Field, which serves as home field for our Soccer and Lacrosse programs and as the practice field for Shorter Football. Click here for a sneak peek at the new design of the turf!

“We have set aside $25,000 to establish the Coach Phil Jones Memorial Endowment to honor the memory of Coach Jones and thank Janie Jones for their dedication, hard work, and commitment to Shorter University and the Lord Jesus Christ,” Dr. Dowless said. “We are grateful that future generations will continue to be impacted by the Joneses’ example of Christian service. His stellar career at Shorter was built on the cornerstone of relationships, and together they had a remarkable impact on players’ lives.”

Contributions to the Phil Jones Endowment may be made online at www.shorter.edu/coach-jones or by mailing a check with Coach Jones Endowment in the memo line to Shorter University Advancement, 315 Shorter Ave. Rome, GA 30165.

A special shout out to the donors and social media friends who supported our first annual SUForward Day on May 4, 2021. This 24-hour campaign was a success, and we are already looking forward to next year’s campaign on Tuesday, May 3, 2022! Mark your calendars for this great opportunity to turn your love for your Shorter family into action.

Shorter Baseball recorded its best record since joining NCAA Division II. The Hawks finished the season 27-17 overall and 23-13 in the Gulf South Conference. Their efforts made them the No. 3 seed at the GSC Tournament and earned them a spot at the NCAA Division II Regional Tournament for the first time in program history! #FlyHawks

Stay connected with your alma mater! Here are a few easy ways.

We were inspired when we heard about the incredible legacy of Freeman Ellis Staley, son of Shorter graduate Misti Freeman Staley (’04) and her husband, Will. Misti graduated from Shorter with a Bachelor of Fine Arts in 2004.

Freeman was born April 25, 2015 and spent the next three and a half months in the NICU. He was released from the hospital to go home to a g-tube, bolus gravity feeds, and pump feeds. Misti and Will were very overwhelmed and needed a solution to help them care for their son.

Their struggle with adding medicines, performing therapies, and feeding Freeman all while holding him led to their invention of the FreeArm. This invention provides an extra hand. It helps at the hospital, at home, and even on the go. The FreeArm clamps to surfaces and works as a travel IV pole. It gives parents relief by ensuring feeds and infusions can be consistent and take place anytime, anywhere.

Unfortunately, Freeman was admitted back to the hospital and passed away at almost 10 months old. But his legacy lives on through the FreeArm. He will truly touch people everywhere.

#ShorterLOVES you, Misti and Will! 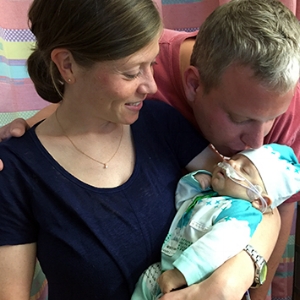 The following items were submitted through Alumni Updates and media outlets. Click here to send items for future issues of SU Insider or email us at alumni@shorter.edu.

Ann Baker Gardner, who attended Shorter from 1962 to 1964, has been married to her husband, Francis, for 46 years. The retired educators have four children and six grandchildren. She continues to enjoy teaching piano, gardening, cooking, and jogging. Francis loves to read and work in the yard. The couple likes to travel and planned to take a train excursion across the United States this summer.

Maurice Thomas (’67) has two daughters, Hélène, 48, and Caroline, 46, both of whom live in Paris and work for the Ministry of Finance. He also has one grandson, Louis, 9, and three granddaughters, Agathe, 9; Mathilde, 13; and Juliette, 18, who has just passed the baccalauréat and the Cambridge First Certificate of English for foreigners. Maurice and his wife, Solange, live in France.

Larry Hibbard (’69) is a retired major in the United States Air Force, where he served as a C-130 navigator, and a semi-retired pastor of a rural Baptist church in Arkansas. He has two children and four grandchildren. After graduating from Shorter, he earned a Master of Divinity from the Southeastern Baptist Theological Seminary and graduated in 1998 from Gupton-Jones College of Funeral Service with an AAS in Funeral Service. He is a licensed funeral director and embalmer in Georgia, Louisiana, and Arkansas.

Larry Hamilton (’74) retired from Civil Service December 31, 2020, with 41 years and eight months serving our country, including 20 years in the United States Air Force.

Linda Patterson Simmons (’76) and her husband, Jim, shared the news that their youngest son, Christopher, married Claire Pierce. Jim and Linda now have six grandchildren and a seventh on the way.

La Donna Rabern Turrentine (’89) has been named principal of Alto Park Elementary School. She and her husband, Steve Turrentine (’79), live in Rome.

Dr. Jonas Jarvholm (’02) has been named partner at Ballard Spahr. He is a member of both the Chemical and Pharmaceutical practice team and the Mechanical Technologies practice team in the firm’s patents group. He drafts and prosecutes patent applications and prepares patentability and non-infringement opinions, both domestically and internationally, covering chemical, mechanical, design, pharmaceutical, nanotechnology, and medical technologies. He also has experience with post grant review proceedings and is licensed to practice before the U.S. Patent and Trademark Office.

Jamie Clements (’05) is the new vice president of development for the Denver Center for the Performing Arts.

Jeneen Hines Andrews (’07) was recently added to the board of trustees for the Gordon State College Foundation for the 2021-22 academic year. Jeneen has enjoyed a successful 21-year career with Georgia Power and currently leads human resources administration, workforce development and the community relations efforts at Plant Scherer in Juliette. She also works to strengthen the company’s external effectiveness and community partnerships in her assigned region. She is a 2019 graduate of Leadership Macon, a member of the Barnesville Rotary Club, and is an active board member for The Grand Opera House and Worksource Macon-Bibb. She is a member of the OneMacon Neighborhood Renewal and Investment committee and part of the advisory board for the I Am King Foundation. Outside of work, Jeneen enjoys traveling, cooking, football, and spending time with family and friends. She and her husband, Michael, live in Hampton.

Will Givens (’07) received the Harlem Globetrotters Ambassador of Goodwill Award at a July 2021 ceremony at State Farm Arena. Will is pastor of Buckhead Life Church. He and his wife, Gloria Rogers Givens (’08), live in Atlanta.

Fisher Marietta (’08) has been named sales manager at Vulcraft Verco. He and his wife, Sarah Burch Marietta (’09), live in Memphis, Tenn.

Rhonda Townsend Whitfield (’08) has been named director of human resources for SR Homes.

Rick Alexander (’09) has been named senior supply chain analyst at The Hillman Group.

Tiffany Askew (’10MA) has been named executive director at the Housing Authority of the City of New Bern, N.C.

Sarah Boring (’11) was recently promoted to manager of earned media at The Home Depot.

Steven Ryan Morrison (’16, ’17MACC) was recently named manager of financial planning and analysis at Cerrowire in Huntsville, Ala.

Gregory Roachford, Jr. (’16) has been named implementation specialist at VenueNext, a Shift4 Company.

Scotty Kent (’19) received a Respect for Law Award from the Rome City Police Department at an annual luncheon hosted by four Rome civic groups (Kiwanis, Exchange, Noon Optimist and Lions) and honoring public safety personnel in Rome and Floyd County. Scotty has been with the Rome Police for a little over a year and led the force with 50 DUI arrests last year.

Malorie Payton Ragsdale (’17) was named parts product specialist at YANMAR America. She serves on the board of directors for The Branch Revival, as marketing volunteer for Show for Hope, as an ambassador for Georgia Steeplechase, and volunteers with the Etowah Valley Humane Society.

Taylor Wilkerson (’17, ’20MA) has been named executive director of IronMountain Solutions in Huntsville, Ala.

Chase Parker (’21) has been named a management trainee at Enterprise.

Shorter University extends heartfelt sympathy to the families and friends of the individuals.

Shorter University offers sincere condolences to the following alumni on the death of their loved ones.

Upcoming Events – Save the Date!

Join us for Homecoming 2021: The One Where the Hawks Fly Home! You’ll have the opportunity to reconnect with friends, former classmates, faculty, and staff. All alumni are welcome!

Make plans to join us Thursday, December 2, 2021, for this year’s Christmas on the Hill President’s Gala. This don’t-miss event is a wonderful way to begin the Christmas season and benefit student scholarships at the same time!